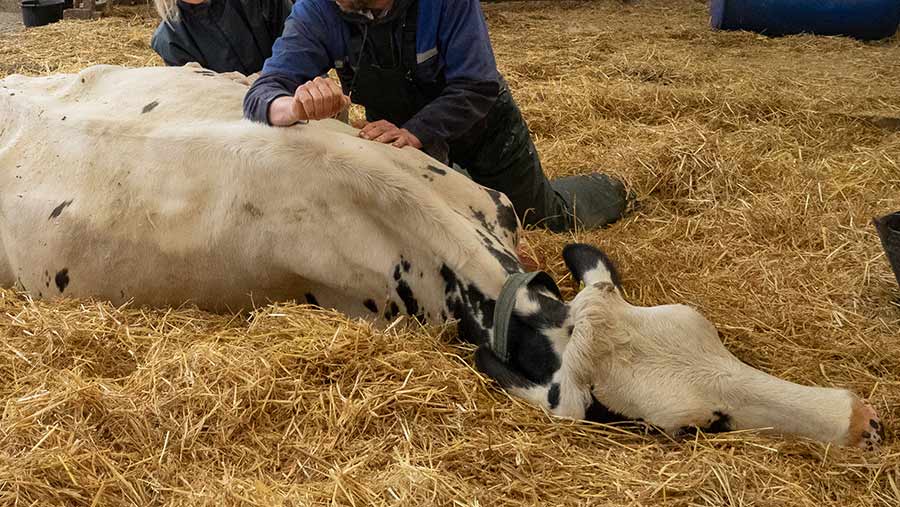 More than three-quarters of dairy farmers report having downer cows, with one-third saying they are a frequent occurrence.

A national milk fever survey of 187 farmers has also revealed subclinical milk fever may be underestimated on farm.

The survey, which was conducted by Boehringer Ingelheim Animal Health, also found a wide variation in how well the signs of milk fever were recognised.

There were some significant knowledge gaps that could be preventing the condition from being tackled effectively, say survey analysts.

See also: Guide to preventing milk fever in your herd

When asked about what type of calcium supplementation they use to prevent milk fever, it was concerning to see many farmers are using calcium injections as a preventative measure, said Kath Aplin, veterinary adviser at Boehringer Ingelheim Animal Health.

She said while calcium injections are vital for treating cows with clinical milk fever, they can be counterproductive if used as a preventative measure.

The artificial boost to a cow’s blood calcium can stop her hormone system from mobilising her own calcium, so, after an initial rise, her blood calcium levels rapidly drop again, Ms Aplin explained.

Instead, oral boluses that contain anionic calcium salts help the cow to mobilise her own calcium reserves.

Levels of subclinical milk fever ‘flying under the radar’

This level of clinical milk fever is clearly a significant headache for the farms concerned, but the survey results suggest subclinical milk fever, and its possible consequences, may be having a greater effect on herd performance.

The vast majority (87%) of farms reported at least one of these conditions occurred sometimes or frequently in the past 12 months. This suggests many subclinical cases could be flying under the radar, say analysts.

There was also mixed awareness of the possible consequences of subclinical milk fever.

Advice for the treatment and prevention of milk fever

Vet Tim O’Sullivan of Shropshire Farm Vets explains calcium injections given intravenously are the correct treatment for clinical milk fever. However, when given as a preventative measure under the skin, they can suppress the cow’s metabolic system from absorbing dietary calcium and reduce calcium release from the bone and gut.

“If you have a cow with clinical milk fever, you need to give an injection of calcium intravenously [so it absorbs calcium quickly].”

For prevention, he says calcium should be given orally at, or just before, the point of calving to help the cow mobilise her own calcium reserves.

“If your diet is right, you might not need to bolus them, but it is not always easy to get right, especially in small herds.”

In this instance, he says, it can be impossible to feed close-up diets to dry cows if you only have two to three calving every week, and these herds may benefit from using boluses to prevent milk fever.

Other animals to target include high-risk cows, that are in their third lactation or above, and fat cows.

The target is to keep cases of milk fever below 3% within the herd. If this isn’t being achieved, Mr O’Sullivan recommends consulting your vet and nutritionist.