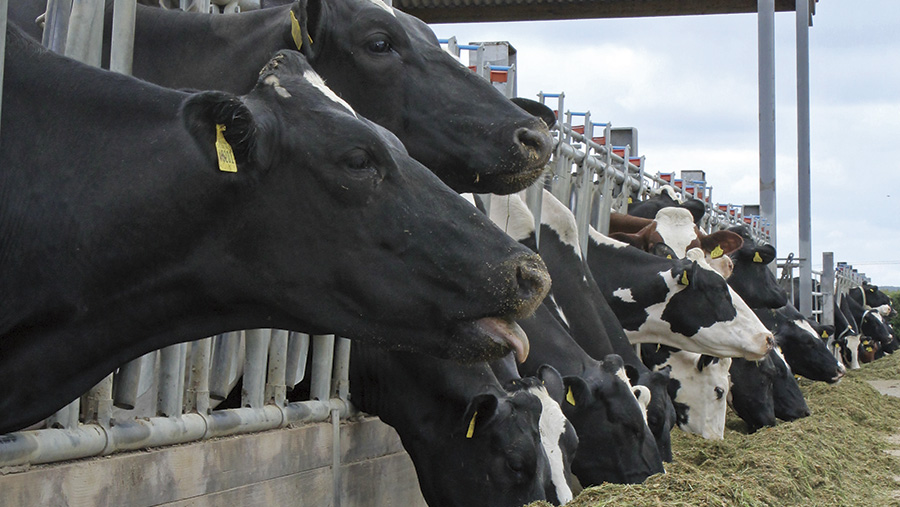 In recent years he has slashed antibiotics use, mastitis and lameness rates, and is now focusing on improved breeding to further boost productivity.

But he hasn’t implemented major management changes – it’s all about measuring, monitoring and making small improvements that add up to big gains.

“We use a consultant and an on-farm software package – too many people manage the business by the bank account, but if you want to look after your cows you need to be making small strategic changes all the time,” he says.

About 1,500 people descended on the farm for the Royal Association of British Dairy Farmers (RABDF)/National Milk Records Gold Cup open day last week, to take home top tips on how to survive and thrive in the future.

“Dairy farming businesses will have to survive at 21p to 25p/litre for the next five years,” says RABDF chairman Mike King.

“Resilient businesses are built around solid financial footings and farmers need to react to market conditions. If they don’t know what their cost of production is at any one time it’s very difficult to make meaningful decisions.”

Mr Baker has used his farm figures to maximise pregnancy rates, which are now running at 24-25%, compared with the national average of 11-12%.

His calving index is 384 days against a national average of about 418 days.

“We’d be losing 1,000 litres of milk. To us, pregnancy is king, and it all comes back to transition cow management. If you can’t get them calved and cleaned up and ready to go they won’t get pregnant again.”

Heifer rearing is also critical. At Rushywood there are strict protocols in place to getting calves off to a good start.

Cows are moved to individual calving pens once the calf’s feet are showing, to minimise group changes, and the calves are removed from the dam after two hours. They are tagged, fed colostrum and weighed, and given a jacket if the weather is cold.

“Little calves burn so much energy to stay warm, which doesn’t maximise growth rates,” says Esme Moffett, veterinary assistant at Synergy Vets. “Cold calves are also more susceptible to disease; so if Neil needs a coat, so do the calves.”

“This is the most efficient time of growth,” says Mrs Moffett. The calves are weaned at 50 days old, when they should be at least double their birth weight.

“Keeping records is essential to monitoring progress,” she adds. “But to my mind, stockmanship is one of the most important things when heifer rearing, as is empowering staff to act if problems arise.”

According to consultant Graeme Smith from Precision Nutrition, attention to detail is key to boosting efficiencies. “One of my biggest bugbears is clean water. Milk is 85% water, so get rid of big troughs and fit easy-to-clean replacements,” he says. “If it’s easy, the job will get done.”

Good clamp management, cleaning the mixer wagon, and pushing up silage more frequently will improve feed intakes and reduce wastage, he adds. “Here, Neil uses a robot to push up.”

Excellence is the aggregation of marginal gain, says Mr Smith. For example, a 1% improvement in milk yield and quality, feed rate and cost, pregnancy and replacement rates, combined with one less case of mastitis and lameness, one fewer casualty cow and a month’s reduction in heifer calving age all tot up to £123.69 a cow a year. “On a 200 cow herd that’s £24,738.”

Cow health and cutting antibiotics use

Mr Baker is targeting 0% milk fever, retained cleansings and left-displaced abomasums (LDA) – and in the past 12 months he has calved 1,862 cows.

Of those, there were 26 cases of milk fever, 19 LDAs and 150 retained cleansings. “That’s too many retained cleansings so we’re introducing selenium supplements in the transition group to help the cows’ immune systems,” says Mr Smith. “Prevention is better than cure.”

That sentiment follows through to antibiotic reduction – something which has been a big focus in recent years.

“We don’t want to use antibiotics – it’s a failure on our part as it means we haven’t controlled mastitis or calf pneumonia,” says Mr Baker.

The biggest cut in antibiotics use has been made by moving to selective dry cow therapy – which, perhaps surprisingly, has mirrored a sharp drop in mastitis.

“Is that because we’re not knocking the cows’ natural resistance? It’s really easy win and the net gain is massive – it’s a waste of money giving antibiotics to healthy cows.”

Mr Baker has cut dry cow treatments from 180 treatments of every 1m litres in 2014 to 60 now. All the cows are bedded on sand cubicles and the farm has a rigorous parlour routine, with the recent addition of a teat brush to improve consistency of teat preparation. Mastitis rates have fallen from 30% in 2014 to 5% now; saving £4,000 a 100 cows.

According to Duncan Williams from Kite Consulting, if the industry doesn’t voluntarily reduce antibiotics usage, it won’t be long before legislation forces farmers into it.

“The third-generation cephalosporins are essential for life-saving treatment in hospitals so we are being asked as an industry to move away from them,” he says.

Since 2014 critical antibiotic usage at Rushywood has fallen from 70% of treatments in 2014 to under 40% now. “That has not been done by not treating sick cows – it’s been done by driving down disease,” says Dr Williams.

Fortnightly mobility scoring has helped the farm to cut lameness, too, by driving early treatment decisions. In 2007 25% of the herd scored two or three; now it’s 5%. “High-quality data – and well-designed sheds – are driving performance in this herd,” says Dr Williams.

In the future Mr Baker hopes to delve more into genomics and genetic selection, and may cull the worst performing quartile of the herd to boost future efficiencies.

“Our top 10% of cows are averaging 18,000 litres – the lower quartile are a barrier to progression,” he adds. “We don’t know what Holsteins can do if we take the barriers out of their way.”