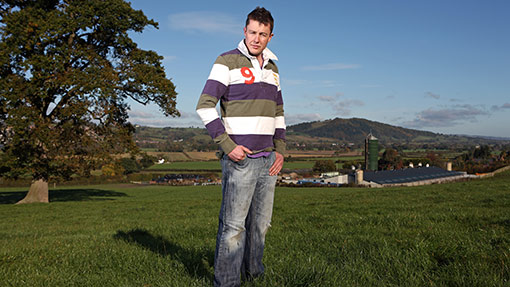 A young dairy farmer has won a six-year planning battle to build a 1,000-cow unit in Wales.

Fraser Jones of Lower Leighton Farm, near Welshpool, Powys, was given the go-ahead on Thursday 12 June by planners and legal representatives of the Welsh minister for housing and regeneration, Carl Sergeant.

The decision marks the end of a long-running fight between Mr Jones and welfare campaign group the World Society for the Protection of Animals (WSPA), which is opposed to larger-scale herds.

The original application was made in 2008 and was initially refused by Powys County Council’s planning committee which cited the smell, noise and animal welfare concerns as reasons to reject the venture.

During a to-and-fro battle, which saw appeals and decisions won and lost on both sides, the Welsh government also became embroiled and a public inquiry was ordered in March 2013. The Welsh minister approved the development in October 2013 but a further legal challenge was launched by the WSPA.

It was this final challenge that was rejected this week.

Speaking after the decision, Mr Jones told Farmers Weekly: “I was 28 years old when all this started. I am 34 now.

“The decision is a boost to proactive and forward-thinking farmers and will enable me to stay in this industry and compete.

“It will also provide jobs and income for the local community,” he added.

Mr Jones said work on the £3.5m unit could begin as early as next week.

“I have a bit more paperwork to do but I aim to get the diggers in as soon as possible.”

The unit will be made up of three cubicle buildings of about 96x30m (320x96ft), collecting yards and a 72-point Westphalia rotary parlour.

“The parlour has been sitting in crates for six years. I am really looking forward to unpacking that now,” Mr Jones said.

“Westphalia has said there will be some software updates but everything is ready to go,” he added.

The first construction job is to build silage clamps and a six-apex forage store.

Once the dairy is up and running, it will be staffed by 12 full-time workers and up to four part-time jobs.

Mr Jones advises other farmers in similar positions to persevere. “It has been a very worrying time and it has taken six years to get to this point but I never gave up hope. There have been lots of highs and lows but perseverance has been key.”

But the losing legal team from WSPA said it was shocked and dismayed at the outcome.

Simon Pope, WSPA UK director of campaigns and communications said: “WSPA is truly saddened and disappointed that we’ve lost this case. We’ve been working alongside the local community on this for over two years and we can only imagine how devastated they will be on hearing this news.”

“WSPA’s serious concerns about the animal welfare of the cows within this system, as well as the impact it will likely have on the local area, consumers and other dairy farmers remain. Despite the loss, the charity believes the legal fight was worth undertaking and that its actions were firmly in the public interest,” Mr Pope said.

He added: “WSPA knows that our supporters, who have been part of this fight alongside us and made their concerns about these kinds of factory dairy farms very clear, will be just as upset as we are to hear this news.”