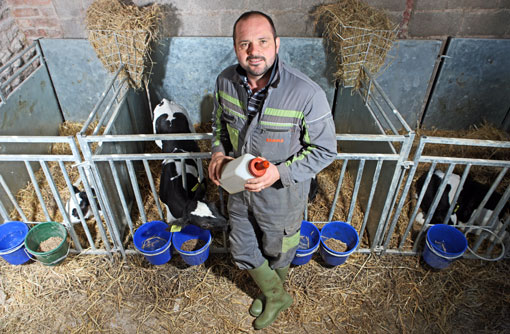 As a follow-up from Farmers Weekly’s Youngstock: Stop the Loss campaign, a group of specialist advisors teamed up to form the Pneumonia Hit Squad and visited three producers to troubleshoot their calf-rearing systems.

The Hit Squad’s recommendations prove you don’t have to have a big, new set-up to get the best from your calves – it’s about making the most of the buildings you have. Aly Balsom reports from David Richards’ Ridgend Farm in Worcestershire.

How David Richards’ rearing system is set up

To improve both calf and human flow through the system, the Hit Squad recommended setting up a specific, contained calf unit using existing buildings.

This would involve renovating a small, brick shed used for general storage, and putting older calves in a high-roofed shed opposite, which is currently earmarked for younger animals.

Commenting on this high-roofed, open-fronted barn containing six new pens for calves at one end, Mr Williams said: “Six pens of six baby calves will never drive ventilation in this shed. This shed is probably better for 20-30 calves of six to 10 weeks old.

“You would also need to open or raise the ridge or cut holes in the thermo-cement to provide an outlet.”

Mr Potter suggested using this shed for weaning. However, the slope on the floor would need changing so drainage was directed away from pens.

By modifying the small, brick shed opposite, the Hit Squad agreed that this would create an ideal, easily ventilated shed for smaller animals, because of the smaller internal air space and lower roof.

However, both air inlet and outlet would need to be addressed. The individual calf pens could then be moved into this building and loafing areas could be set up on the concrete between this shed and the new weaned shed opposite.

Currently, calves are housed in a high-roofed shed adjoining the parlour, which in itself creates issues, as small animals are again unable to ventilate such a large area. With stock remaining in this shed until about three to four months old, this also means mixed-age animals are sharing the same air space.

Mr Potter commented: “The main problem here is that the heat generated from the parlour and adult cows in the adjoining shed has nowhere to go, and condensation will fall on to the calf beds.” This could potentially create a disease challenge.

1. Think about the stocking rate of baby calves – don’t put up buildings that are too big and too high.

2. Buildings need both an inlet and outlet

4. Ideally buildings should be built for a specific purpose

5. Roofing material will effect how a building is ventilated

A building containing animals on a still day ventilates by a phenomenom known as the “stack effect”. The animals drive this with the heat they produce.

Both inlets and outlets are needed to allow air to be pushed up and out of the building and new fresh air to be drawn in. It’s essential you have both. The most common finding in buildings is a lack of high-level outlet.

See the Hit Squad in action on farm in this video, and read about our other case studies at Boycott Farm in Yockleton, Shropshire, and Combe Farm in Castle Combe, Wiltshire.