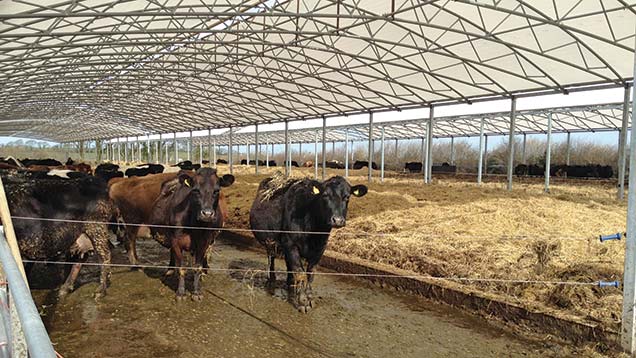 Polytunnels have long been used on sheep farms as more affordable methods of housing, but they’re growing in popularity among dairy farmers.

Previously dry cows at Stone Farm, Lifton, were outwintered on kale or fodder beet and calved outside. But concerns with water run-off after the wet winter of 2013 meant he was forced to re-think how cows were managed during the season.

Mr Uglow says outwintering was also taking 20% of the 121ha grazing platform out of grass to make way for brassica crops, which left them with a deficit in the shoulders of the season.

“We had concerns from the Environment Agency about run-off, but also we were taking out a large area of the grazing block to winter cows.

“We decided to put cows back in a controlled environment so we could utilise grass better during the grazing season and if necessary purchase a cheap feed for dry cattle,” explains Mr Uglow, who runs an NZ-style system consisting of 360 spring-calving, crossbred cows.

Last winter, dry cows were being housed on loose straw beds in the tunnels. These also doubled up as a new stand-off area to feed milkers, making up the feed deficit until the grass started to grow equal to demand.

Milkers received 3kg/DM of maize after the morning milking before they were turned out to pasture.

“In the shoulder of the year we will have a larger grazing area to reduce the amount of concentrate and silage use. It is an economical way of keeping them for the winter without taking too big an area out of the grazing platform,” says Mr Uglow.

Mr Uglow says he considered building sheds, but with the cost of a polytunnel one-third that of a concrete structure, it was a no-brainer.

“I felt a shed was unnecessary because we really only use it for two to three months of the year.”

Planning fees are charged on tunnel size, so by erecting smaller builds he was able to lower the cost.

The tunnels are 50m long by 15m wide and have upright steel girders spaced 3.65m (12ft) apart to create suitable spacing for a feed barrier.

This is the largest polytunnel Allan Godber, from AG Polytunnels, has ever completed, so meticulous attention was taken to ensure the structure was strong enough to withstand adverse weather conditions.

Figures correct as of March 2015

“The bracing in the roof is triangulated to make it really strong,” explains Mr Godber, who manufactures the tunnels at the company base in Drybrook, Gloucester.

Despite the fact the polytunnels were a cheaper option, no expense has been spared to reduce staff costs in the long run.

“When we [the cows] are dry it is like a holiday for staff so we want to make our workload as simple as possible.”

Mr Uglow has invested in automatic scrapers costing £14,000 to scrape out the feed passages.

“If you start costing in a scraper, tractor, fuel and manpower, it isn’t a bad investment.”

Fibres in the concrete flooring should help reduce slipping and LED lights will be fitted later this summer.

The polythene roof has a lifespan of five to seven years and it will cost between £300 and £400 to replace each of the 10 sheets on each tunnel, but Mr Uglow says that at less than £1,000 a year a polytunnel, this level of depreciation is not that bad.

Mr Uglow says the tunnels have made calving easier, because he is not having to chase cows around a field.

“The majority of what we do is for sheep housing. But we have started to do a lot of calf housing for dairy farms that have been shut down with TB and need extra housing space.”

The calf housing is smaller at just 9m wide. As with the larger polytunnel there is a vent in the roof, but the sides feature one metre high corrugated steel walls to create good air flow through the build.

He adds: “Many dairy farms are expanding because they are having to cope with lower milk prices. This offers them a cheap way of housing cattle.”

One of the big advantages is they don’t have to be sited on flat ground, says Mr Godber who says the health benefits of polytunnels are well documented.

The clear roof has UV disinfecting properties because it lets 70% of light pass through the material, explains Mr Godber.

“But because it only lets 70% of sunlight pass through and is white in colour, it keeps animals cool on hot days,” he adds.