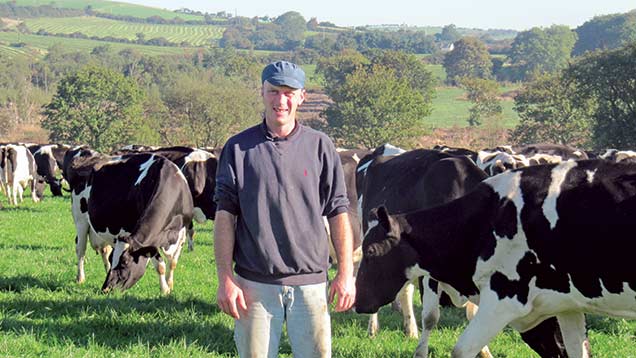 You don’t have to a have spring block-calving herd to make the most from grass.

The Owen family, Lampeter, Ceredigion, has been running a paddock grazing system for the last 50 years, despite running a herd of all-year-round calving cows.

While many farmers have recognised the merits of moving to a lower cost, block-calving system, Mr Owen believes all-year calving herds can still be competitive by making better use of grass.

Paddock grazing, alongside a policy of pre-mow grazing, is enabling the herd to produce 4,500 litres of their total 6,800 litres from forage alone.

Dairy farmer Andrew Owen credits the pre-mow grazing, which he says he stumbled upon by accident, with transforming his grassland – two-thirds of which is severely disadvantaged.

“Cows were rejecting grass so we were going in behind them with the topper and cutting it off.

“One evening I went out and topped a bit the cows hadn’t grazed and I was amazed the next day to see how quickly it had grown back. You could really see the difference.

“From then onwards we never looked back. It has transformed our system,” adds Mr Owen, who milks 130 Friesian cows in partnership with his father Gerwyn, mother Glenys and wife Ann.

From the first week of March milkers are rotational grazed on a 26ha grazing platform, which is split into small 0.4ha paddocks using permanent fencing. They are moved twice a day after morning and evening milkings.

“I have never measured grass. Everything is done by eye; I’m old-fashioned.

“Cows go in at the third leaf stage and it’s a matter of judgment by eye to get the grass down to what we want,” explains Mr Owen.

“Fertiliser is applied in February, little and often throughout the grazing season. A light sprinkling is applied every grazing following the cows around,” he adds.

From the end of May grass is pre-mowed twice daily before cows enter paddocks up until August, to prevent selective grazing and maintain quality and even growth during the summer months.

He says entering paddocks pre-grazing means he isn’t at risk of spreading muck around the field and making grass unpalatable for cows.

“The beauty of pre-mowing is when the regrowth comes back it is uniform and good quality,” he explains.

Cows are grazed for a few hours in the day in October when they start to come in by night, but are fully housed by November, weather permitting, to prevent poaching and the platform is allowed to rest until the following spring.

Mr Owen says running an all-year calving herd of cows makes you more focused on grassland management throughout the entire year to ensure good-quality silage is made for the autumn and winter months.

“If you’re all-year calving you don’t take your foot off the pedal at all.”

The Owens do all their own silage making, aiming to take three cuts between May and September, which will usually yield about 2,000t of forage. Last year’s silage analysed at 28% dry matter and 11.7ME.

At housing, diets are kept simple. Cows receive silage, straw and 0.5kg of sugar beet and are fed a flat rate 18% crude protein cake in the parlour. This drops to 16% when the cows are turned out to grass.

“Because we are producing so much off forage we’re feeding just under 700-800kg of concentrate a cow a year,” says Mr Owen.

In the last 12 months Mr Owen has moved to twice-weekly feeding, which he says has improved cow behaviour and hasn’t dented yields in the slightest.

“We’ve changed our system a bit again. We used to feed every two days up until this year, but now we gone to every three days.”

A shear grab is used to feed the cows. As well as keeping the clamp face clean, Mr Owen says the silage maintains its freshness within the feed passage.

“Cows are more content. It is only on the third day when silage is fed that you get a disturbance. It also frees up my time to do other jobs.”

Mr Owen says he can afford to spend more time with his family over the holidays, which is an added bonus.

“I fed Christmas Eve so I didn’t have to feed until the day after Boxing Day.”

Outwintering youngstock has enabled Mr Owen to cut back on silage.

“We are getting away with making less silage because our youngstock is out and the cows go out early. We’re getting earlier in the spring all the time so we are gaining, but there’s always room to improve.”

Replacement heifers are turned out to grass at four months of age and are outwintered on grass alone.

“We did have 400 tack sheep and everything indoors, but we have cut the sheep down to 150 to go on to the poorest land and we keep youngstock outside on the driest land to save on bedding and feed,” explains Mr Owen.

Between September to March cows are given two goes of AI using Friesian semen. If they fail to conceive after this they receive Belgian Blue or are run with a Hereford sweeper bull.

“After March, until July everything goes to beef and the calves are sold at three weeks of age. It allows us to get Friesian heifers out on grass that year. It eases management and gets them eating grass early so we can train them from the first year,” he adds.

This year 14 heifers are being paddock grazed across four acres and they are moved once a day. “The idea is they don’t revisit a paddock. It is once around.”

Heifers are brought inside and housed in cubicles one month before service to calve at two years.

Despite the fact their milk contract has dropped by 9p/litre in the last 12 months, Mr Andrew says producing so much milk from forage means they are able to keep their production costs to a minimum.

“Cost is something we can control. What I get for milk is out of my hands, but I can control costs to the best of my system.”