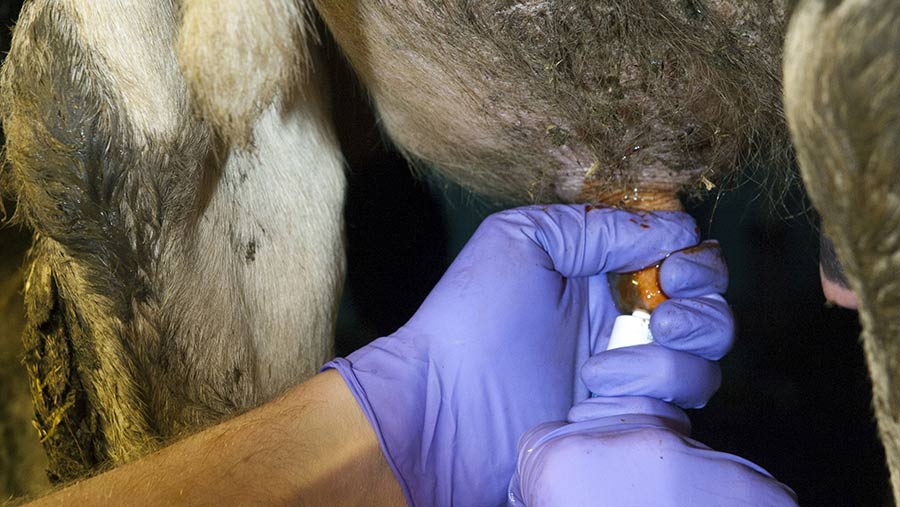 Reducing antibiotic use in dairy herds by switching to selective dry cow therapy does not lead to an increase in mastitis, a research project has shown.

The project, carried out by SAC Consulting, focused on reducing the use of antibiotics at drying off on 17 farms across Scotland.

See also: 6 things I learned from visiting US ‘mega-dairies’

Dry period performance was analysed on 3,342 cows, with 57% having selective dry cow therapy (SDCT). The remaining 43% were treated with antibiotics while all cows received an internal teat sealant at drying off.

Researchers found that using antibiotic treatments on just the ‘high-risk’ cows presented no additional threat to udder health in the wider herd.

In fact, it proved that three-quarters of the cows that were showing symptoms self-cured.

Project co-ordinator and SAC Consulting dairy specialist Lorna MacPherson said the research had helped give confidence to farmers to switch to SDCT.

“Initially farmers were concerned about stopping the routine treatment of cows with antibiotics at drying off.

“However, as the project progressed, their confidence grew and many were pleasantly surprised that the incidence of mastitis in cows on SDCT was less than those receiving antibiotics,” Ms MacPherson said.

Underlining the importance of the research, she added: “The dairy industry has cut prophylactic antibiotic use significantly in the past few years and is well on track to meet government targets.

“But it’s important for farmers to feel confident that by cutting out treatments they are not risking a greater need for antibiotics later down the line. This was the main objective of the project.”

The project was funded by the Scottish government in partnership with Muller, Zoetis and the University of Edinburgh.