Regular reseeding has paid off for dairy farmers Richard and Clare Sainsbury since taking on the tenancy of Round Barrow Farm in Wiltshire in 2004.

Starting with 160 New Zealand and British Friesian cows and soil P and K indices of 0 or 1, they have been able to expand their herd to 190 head, yielding up to 7,000 litres, with 52% from forage. And the key to maximising milk from forage and making themselves self-sufficient has been building the soil fertility, which now consistently achieves values of 2 and 3 for P and K.

“We have now been around the whole farm reseeding at least once, if not twice,” says Mr Sainsbury. “To get decent performance from the cows we need to look after our grass and use the best varieties. Our milk has gone up noticeably since we started reseeding. Now all our leys are of good quality. Turnout this spring produced an increase in milk production of 500-600 litres a day, equivalent to two to three litres a cow a day from our long-term grazing reseeds.”

Agronomist Simon Trenary of Countrywide says the secret to the Sainsbury family’s success has been approaching the task on a field-by-field basis.

“Reseeding gives Mr Sainsbury the chance to make a considered variety choice. We regularly walk the farm to identify which fields need to be improved and it makes sense to tackle reseeding in the autumn when the weather is more predictable and you have more time for preparation.”

Ensuring soil is in good condition before reseeding is perhaps even more important than for arable fields. When establishing a grass ley you only get one shot at it in a five-year period, so it is worth taking the opportunity to rectify any soil structure problems, says Mr Trenary. “Mr Sainsbury’s soil is well drained, but if you need to do any remedial work it is far better to get soil fertility, structure and drainage right while you have the chance,” he says.

Slurry analysis on Round Barrow Farm is undertaken twice each winter and fields are analysed every three years. Now, with potash and potassium indices of at least two, slurry can be injected in the spring into silage aftermaths, playing an important role in establishing fertility without massive expense.

Two mixtures form the basis of Mr Sainsbury’s grassland area. The grazing area is sown with a bespoke long-term mixture based on diploid varieties, providing a dense sward to allow maximum intakes of forage for the milking herd. The mixture largely comprises late-heading varieties and has only a hint of a tetraploid variety, to improve palatability. Once leys have been established and cleaned up for weeds, white clover is introduced to improve palatability and summer production.

The second mixture forms the basis of the cutting area and blends hybrid and advanced hybrid ryegrass species formulated to maximise forage production. “We cut these three to four times in a typical season and they also give me some late-season grazing for youngstock,” says Mr Sainsbury.

Over their two-season life, these leys give good yields of high-quality silage that helps to maximise milk production from home-grown forage, with the added bonus that it can be left in for three seasons if necessary, he says.

“While it hasn’t been a particularly good year for anyone, I’ve just had a reasonable cut from both my long- and short-term leys, and the results do prove the benefit of regular reseeding with ME of 12 and crude protein of 15.6%.”

When it comes to establishing the new leys, Mr Sainsbury has honed his technique. After cultivation the ground is flat-rolled once pre-drilling. The new ley is drilled, but with the coulters just short of the ground, so the seed spreads out as it is blown out. This gives the benefits of broadcasting plus the precision of drilling – so a thick ley, but with tramlines for accurate spraying and fertilising.

It’s then rolled twice post drilling – first ring-rolled and finally flat-rolled. This also helps to minimise pest and slug damage to give every chance of the best results. 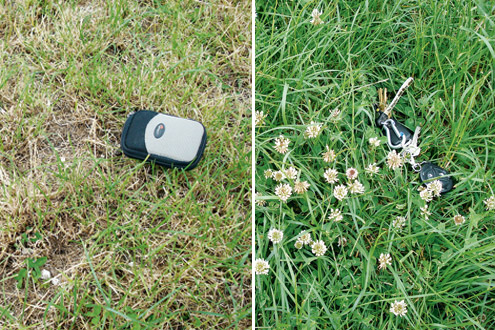