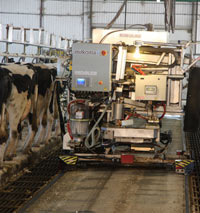 What do you do if you tether your cows, don’t use a milking parlour but still want to have a robot to milk them? Easy – you get the robot to go to the cows.

That’s the principle behind an extraordinary new robot milker developed by ex-farmer Leo Rousseau in Quebec. It’s called Roboleo and was launched on to the market by local firm Milkomax in July this year after three years of development and trials.

In this part of Canada 90% of dairy herds are kept tethered and a portable milking machine taken from cow to cow. So Mr Rousseau’s design allows the robot milker to move up and down a rail in the centre of the passage and go to each cow in turn.

It takes 7-8mins to milk each cow, including travel between animals. At the end of the row of cubicles it turns through 180° and starts down the other side of the building. If the cow can’t be milked for any reason, the machine sends a text to the cowman.

How it actually milks the cow is ingenious. All the cows are on a chain that is long anough to allow them to lie down.

The unit moves to the rear of the cow and then extends two rollers along each side of the cow. These close a little as they get to the animal’s neck and gently pull her backwards into the milking machine.

It’s also potentially more efficient than a standard robot milker. A conventional robot milker allows free access, so some cows will come often and some more rarely. With the Roboleo, in contrast, the farmer knows that every cow has been milked twice each day with no unnecessary trips to and from the milker. Cost is E195,000 (£170,000)