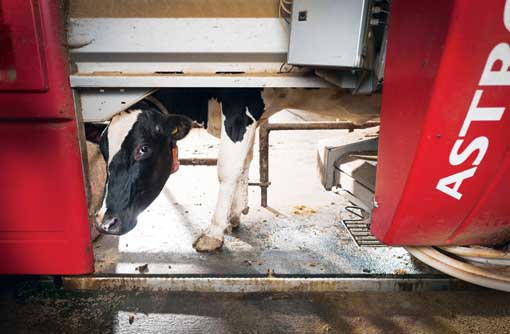 Balancing yield with the health and welfare of cows is paramount.Jeremy Hunt visited two of thehighest-yielding herds in the country to find out how they do it

The highest-yielding dairy herd in the UK, which has individual cows giving 20,000 litres, hasn’t achieved its premier podium place without many years of dedication to the way it breeds, feeds and manages its cows.

But owner John Shropshire admits about 2,000 litres of the herd’s current average yield of over 13,000 litres has been produced since robotic milking was introduced two years ago.

And in the last 12 months the herd has increased production to move from 33rd place in the NMR yield rankings to this year’s top spot. It recorded a yield of 13,433kg of milk with 908kg of fat and protein. The current calving interval is 420 days.

Mr Shropshire, who runs the herd with his sister Melanie Phillips at Bridge Farm, near Market Drayton, took over the herd from his father more than 30 years ago. “Yields were nothing very special in the early days, but we were bringing in Holstein genetics and started to work more closely on the nutrition. About 12 years ago the herd was averaging about 11,000 litres but although we didn’t milk three times a day we felt there was a lot more milk to come,” says Mr Shropshire.

There are 65 cows in the herd and while close attention to detail clearly has an important role to play in its achievements, it proves what’s possible from a herd of cows that’s simply been well bred, managed and carefully fed and hasn’t relied on high-flying bought-in genetics to bolster its milk figures.

Mr Shropshire doesn’t believe his management system means he “nurses” his cows, but maintaining a high standard of welfare is important – and within that he rates the more regular milking regime afforded by the farm’s single Lely robot as being critical to the lift in production.

“Our cows are now milking to their true potential. We aren’t feeding any more cake a litre but when you’ve got fresh calvers going in to be milked four times a day it makes you realise just how much more these cattle need milking and how much more they’ve got to give if we allow them the opportunity to do it.”

But running a consistent milking regime with an equally consistent year-round diet is important. “We believe providing the cows with the chance to off-load milk when they want to and to eat a diet that removes the fluctuations you get when cows have to rely on grazed grass for a large part of their diet has a lot to do with getting the optimum yield.”

It’s an ethos that means the herd is fed all-year-round on a TMR diet comprising grass silage (50%), wholecrop wheat, maize and fodder beet. The highest yielders are taking up to a maximum of 16kg of cake a day through the robot. The herd also has access to a paddock area adjoining the cow buildings. “I think it’s important to give cows an opportunity to get off the concrete and to walk and take fresh air outside. That’s all the paddock has to do – all the feed is in the trough.”

“The genetics have to be there to respond to the system so breeding has always been very important to us. As is always the case some don’t last as long as others but we’re now developing some very good families with plenty of type and the ability to produce these high yields and last a long time. These families are a very important part of the way we’ve developed the herd and are breeding true for their longevity.”

Mr Shropshire admits it’s not easy “keeping on track” to maintain the type that will sustain cows at this level of production. “Yes, we’ve used certain bulls and have come unstuck but that’s what breeding is about. It’s a hard job but we look for bulls from high-type families with longevity. Addison daughters put to Shottle have done well and that breeding has been followed with Bolton and Roylane Jordan.

“We’ve bought-in one or two cows over the years to bring in some new genetics, but spending time developing good cow families with dependable traits that you can rely on has played a very important part of where we are today. When a cow scores Excellent and gives you 20,000 litres it doesn’t get much better than that if you enjoy breeding cows.

“High-yielders are giving us at least five lactations and even more in some cases, but we’ve noticed that udders have been a lot better since the robot was installed. I don’t think we appreciate just how heavy milk is to carry around all day and we don’t serve high-yielders until 150 days.