Princess Anne has presented a lifetime achievement award to industry commentator Barry Wilson for his contribution to the dairy sector.

The Princess Royal Award – made annually by trustees of the Royal Association of British Dairy Farmers – was presented to Mr Wilson at Buckingham Palace on Wednesday (11 April).

Mr Wilson was chosen as the unanimous winner for his insight into dairy politics over the past 40 years – including as publisher of the Dairy Industry Newsletter.

RABDF president Lord Curry described Mr Wilson as an outstanding observer and commentator on the British dairy scene for almost half a century. 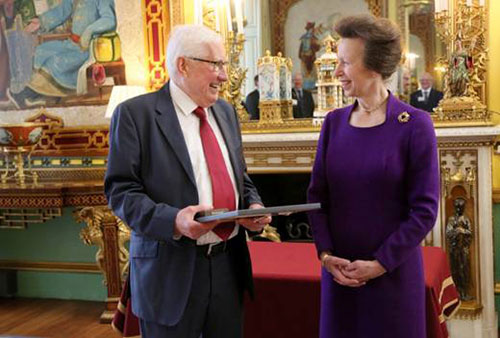 “For the past 20 years or so he has written and published the fortnightly Dairy Industry Newsletter which is essential reading for anyone interested in the machinations of how the global dairy scene operates.

“He has also been very involved with the British Dairying magazine turning his thoughts into issues that dairy farmers need to consider.”

The Princess Royal Award has been awarded to many industry influencers since it was established in 1991.

More recent years have seen names such as Ian Potter, Dick Esslemont and John Alvis win the award for their contribution to dairying.