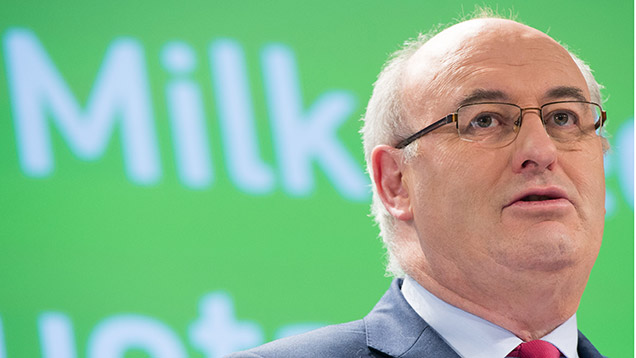 EU farm commissioner Phil Hogan, who has famously refused to admit that UK dairying is in crisis, has finally acknowledged that the industry is in “very serious difficulty’’.

Speaking at the Royal Welsh Show on Monday (20 July), Mr Hogan said extra cash would be made available for promoting UK dairy products.

“You have a structural problem here in the UK dairy sector and you have to deal with it. You have to look at how you are selling your product,” he said.

“There is a very serious difficulty in the industry and we are looking at how we could have more promotion for your product, particularly in the Far East. There are not that many solutions, but we are doing what we can.”

However, Mr Hogan insisted  the UK dairy industry was faring better than producers in other European nations.

He referred to figures that put the average UK milk price in June at 32.15c/litre (22.39p), compared with farmers in Latvia who received 22c/litre (15.32p) and those in Bulgaria, who was paid 23c/litre (16.02p). However, he did not point out that the cost base between countries could vary hugely.

Dairy farmers in Wales are not only struggling with low milk prices. Under the new direct payment system, 1,541 dairy farmers will have their Basic Payment Scheme funding cut by €14.2m (£9.87m).

“The industry is in a worse place than it was in 2009,” he said. “If you don’t support this industry, I am fearful that by the autumn this dairy sector will contract so badly, I don’t think it will recover.”