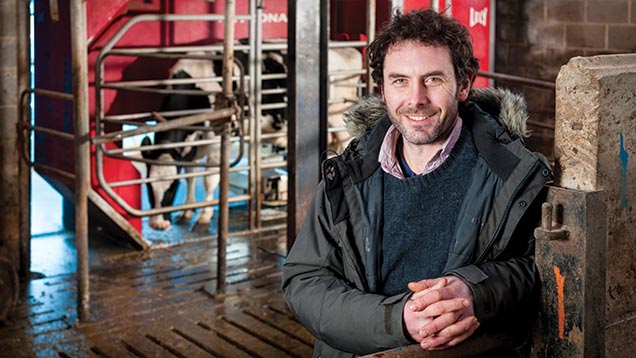 A North Yorkshire dairy herd has made a successful switch to robotic milking and increased herd size from 140 cows to 370 for less than half the normal cost by installing six second-hand units.

Andrew Leggott bought his first three “used” robots in 2007 and a further three have kept pace with the herd’s expansion in recent years.

Although he’s paying almost £30,000/year for service and breakdown cover, he’s convinced the decision to buy second-hand has provided him with an efficient robotic milking system for a fraction of the cost of buying new units.

“Our old parlour was on its last legs and badly needed replacing, and so was the shed it was housed in. Although we weren’t actively considering installing robots, an opportunity suddenly came along to buy three second-hand Lely units from a local farm.

“That was seven years ago when the milk price was 17p a litre. We made the decision to buy the second-hand units purely on cost more than anything else,” recalls Mr Leggott.

Two of the units were 18 months old and another two years old. The three Lely units cost £150,000 but included the tank, collars and all the electrics. That’s in contrast to a new Lely robot, which would, on average, cost about £100,000.

Two of the units were installed in a new cubicle shed and the third in an existing building of 70 cubicles. There were 140 cows in-milk at the time.

“I had always been very keen on the benefits of getting high-yielding cows milked more often and we’d already seen what could be gained from a previous spell of three-times-a-day milking,” says Mr Leggott, whose herd averages just over 10,000 litres/year.

Since robots were introduced the herd average has increased by about 1,500 litres/year, with the best individual cow peaking at up to 80 litres/year. It’s not uncommon for cows to peak at more than 70 litres/year.

“I suppose the question is whether or not the structure is in place for this country’s dairy herds to use multiple robot systems in terms of their cost, as well as the cost of maintaining them.

“If we were to get many more installed I have some big decisions to make.

“Do I do as much as I can in-house, buy some of the parts and service kits I need and just pay Lely whenever I need them? Or do I stick with the super service contract – and that’s assuming I can still get one to cover second-hand units more than 10 years old?”

Mr Leggott says Lely also offers other contracts that cost less, but cover less. “It’s about deciding what’s best value for money, but these are our options.”

He admits he was initially concerned about the potential risk associated with buying second-hand. “When you’re spending that amount of money it’s always a worry.

“Some parts within the units did have either five- or 10-year warranties on them but we’ve opted for a super service contract.

“It’s the most expensive offered by Lely at £2,330/month for five of the six units and is supposed to cover us for everything to do with the operation of the robots, apart from compressors.

“Only the second robot on each farm has a discount so I’m no better off having five under contract than I am having two.”

The units were sourced through Tim Gibson of Bedale, North Yorkshire, who now specialises in procuring second-hand robots and who arranged for them to be fitted.

“The service contract gives us a safety net, but it’s a very expensive one. The units are serviced six times a year and the contract gives us round-the-clock cover from an engineer. The alternative pay-as-you-go system costs £95/hour for labour and a £105 call-out fee, plus the cost of parts.”

Mr Leggott couldn’t get a super service contract on the sixth robot he installed last year so he’s taken the pay-as-you-go service option on this one. In six months he says it has cost little over £100 in parts.

But Mr Leggott’s investment in second-hand robots hasn’t been based on an expected life-span of each unit before it needs replacing.

“We didn’t approach it from that angle. There’s not a lot you can’t take off and replace if it goes wrong, so in theory these machines should be able to be kept going if they are well looked after.”

He believes dairy farmers considering switching to robotic milking should be able to find second-hand units they can buy with confidence provided they know where they are from and make sure they have full details of the unit’s service history.

“Apart from the high maintenance contract costs we’re very happy with our decision to buy second-hand robots. The most recent ones we’ve installed have been older – about 10 years old – but cost less at about £25,000. They came from Belgium and cost £3,000 to ship over.”

But Mr Leggott says robots should not be looked upon as simply an opportunity for an easier lifestyle.

He says: “If dairy cows are your business there is no easy option no matter how you milk them. Robotic milking throws up problems just like any milking system, and if anyone thinks life will be hassle free they are deluding themselves.

“The phone can ring just as you’ve gone out for meal or just climbed into bed – and you’ve got to deal with the problem.

“But provided you buy carefully I don’t think there’s any more of a risk with second-hand robots compared with buying new units.”

Locating the robots in the cubicle buildings was an important consideration. The system has three robots located side by side in the high-yielding group; there is one robot servicing the low-yielders and two more milking the heifer group.

“It’s something you need to give plenty of thought to and particularly at the start when you have to train cows to use them. Our cows have free access to the robots, but the key to the whole operation is diet and ensuring cows aren’t lame.”

Mr Leggott says it’s not just the feed that’s on offer to the cows in the robots that’s important, but the quality of the feed in the TMR mix.

“If cows aren’t going into the robots it’s because of their diet or they are lame – it’s as simple as that. For example, if a cow is suffering from acidosis she certainly doesn’t want to go into a robot and eat 4kg of cake. So making sure cows are sound and can move around comfortably and that the diet is encouraging them to go into the robots is critical to get the best out of this system,” he says.

Tips when buying a second-hand robot