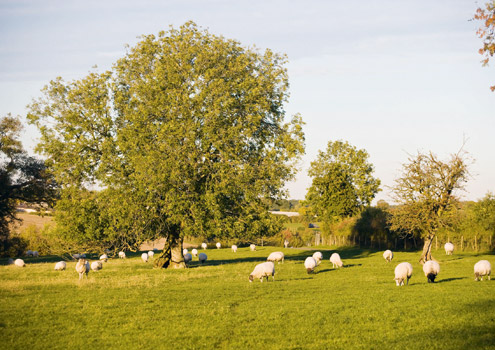 Jeremy Hunt discovers why the sheep sector is now at the cutting-edge of genetics.

Charles Sercombe has three aims as a breeder of pedigree Charollais sheep – to bring the fat levels back to zero and increase the growth and the muscle.

“But growth and muscle are genetic opposites. If you get exceptional growth you sacrifice muscle and vice versa. That’s the constant challenge, but being able to base breeding decisions on performance recording – and now through the use of EBVs – has been fundamental to us for over 20 years,” says Mr Sercombe.

His well-known Dalby flock of 180 pedigree ewes at Melton Mowbray, Leicestershire, began recording in 1990 – initially using weight gain as the primary selection tool and then quickly adding ultrasound scanning to measure muscle depth and fat depth and create an index from those results.

“But it produced high indexes for fast growing sheep that had good muscle depth, but were ultra-lean. Some sheep would grow quickly and be very lean, but they were the ones that developed into big carcass sheep that wouldn’t finish,” says Mr Sercombe.

The introduction of the ATAN index discriminated against over-leanness. “At that time we owned the highest indexing ram in the breed. He had an index of 400, but had -1.9 for lean. So under the ATAN system his index fell from 400 to 220 overnight. That was a bitter pill to swallow.”

Charles Sercombe says his goal is to produce top performance sheep with good indexes and EBVs, but that are also able to win in the show ring at the highest level.

He’s been a long-time user of CT scanning and regards it as a major step forward enabling breeders to measure more accurately traits such meat, fat, bone and gigot shape. “CT scanning has transformed the way we do things.

“Growth rate is paramount. We need sheep with the genetic ability to grow as fast as possible, but we need to have sheep that take the right amount of fat cover with that growth and also increase muscle depth.”

In 1990, from a base of zero for 21-week weight, the breed average for Charollais is now +6.5kg. Charles Sercombe’s flock average at the 21-week weighing is +9kg – the highest in the breed. His best performers are achieving +14kg.

“But instead of focusing simply on the overall index we’re now looking at individual trait EBVs for scan weight, muscle depth, for gigot shape and muscularity.

“The big advantage of EBVs today is that you can tell exactly what that ram will produce so we can talk to customers with different types of commercial ewes and confidently offer them rams that are best suited to their needs, because we know their individual traits’ scores.

For the future, Charles Sercombe sees EBVs becoming used in an even wider context. “We can still increase the genetics for growth and muscle within the breed, but I think we’ll see EBVs to evaluate efficiency.

“We need to be able to measure efficiency in terms of how much we are actually feeding our sheep and how good they are at producing meat. But my priorities will continue to be growth and muscle while always being aware of bringing the fat back to zero.”

Although commercial sheep producers have been rather slow to use the benefits of performance recording undertaken by mainstream terminal sire breeds over the last 25 years, the sheep sector has achieved an impressive level of improvement across a wide range of traits and is now at the cutting-edge of genetic selection through the use of CT scanning.

Based on sheer scale, pedigree sheep breeding has had even greater ability to make faster rates of improvement in terms of performance – there are now 18,500 Lleyn being screened by Signet each year.

Latest figures illustrating the genetic gain for growth rate (scan weight EBV) show a marked improvement over the last two decades – although the breed achieving the most significant improvement is Meatlinc.

Starting from a base figure of 0 in 1990, the Meatlinc has achieved a scan weight EBV (kg) of just below 10. Leading terminal sire breeds have all shown steady improvements in scan weight EBV figures over this period with Charollais currently at just over six followed by Suffolk and Texel at just below six.

Wider use of EBVs to provide selection guidance for traits such as lambing ease, birthweight and worm resistance and even meat eating quality will be the main drivers of performance recording in the future and while the uptake of superior genetics in commercial flocks through AI has huge potential it is still a progress route hampered by tradition and cost.

The financial benefits to commercial sheep producers, accruing from a range of improved genetic traits offered by performance recorded terminal sires, is now quantified at around £3 a lamb compared with using non-recorded sires.

“Improvements in growth rate and the reduced finishing times have improved efficiency and so improved profitability, but ultrasound scanning was the biggest breakthrough in performance recording in sheep enabling us to measure subcutaneous fat and muscle in the live animal,” says EBLEX breeding specialist Sam Boon.

In its most simplistic form, performance recording has been able to identify the most beneficial traits in pedigree animals that can be used to improve the efficiency of sheep farmed by commercial producers.

Following the introduction of sire referencing and being able to record the weight gain of ram lambs at relevant stages of development, sheep breeders benefited from ultrasonic scanning to predict carcase composition.

“The on-farm ultrasonic service, introduced in 1987, measured fat and muscle depths and was followed by the introduction of the relative economic values of +3 and -1 for carcass lean weight and carcass fat weight to be used in the Lean Index,” says Mr Boon.

“The quantum leap in performance recording was achieved by the introduction of BLUP to calculate indexes, but while terminal sire traits have driven performance recording, selection for different breed objectives such as maternal indexes have been introduced along with EBVs for lambing ease and lamb birthweight.”

But what does the future hold for genetic selection in the sheep sector?

“The challenge is still the collection of phenotypes. DNA in isolation won’t tell you about its relationship with other traits.

“New, low heritability traits such as health and reproduction are possibly on the agenda, but these are often hard to measure. Perhaps meat-eating quality being assessed using CT in sheep is something for the future, but CT scanning will certainly help us to select the elite from the best.”