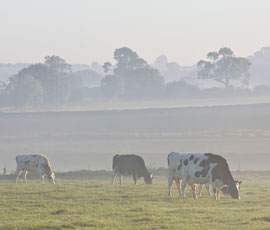 Small dairy farms have no future in the UK and are “on their way out”, a global investment expert said.

“None,” he replied. “If you want to preserve a structure in a small, family farm-type structure in the UK, and there’s good reasons for wanting to do that, then it requires public support.

But while he would not advise people against investing in dairy farming in general, Mr Schon said he would not put money into British farms.

“Today, if you gave us £100m, we would probably invest it in dairy farming either in Australia or New Zealand in some sheep farming, and some crop farming, most likely in eastern Europe, say Romania,” he explained.

“Close runners up would be Uruguay for mixed farming and those parts of the States where you don’t have the Corn Belt hype in land prices.”

Mr Schon said there was “nothing wrong” with investing in dairy farms in the UK in general, but that British dairy farmers were too reliant on farm subsidies.

“The problem with Europe, or central EU, is that European subsidies have been capitalised into farm values to an extent that makes farm investment comparatively unattractive when compared to countries where you don’t have farm subsidies and you make return without having to rely on public support.”

“The fact is, that production costs in New Zealand are anything between 30-40% below the EU at today’s currency rates,” he said.

“(This is) not because New Zealand dairy farmers are more intelligent, or their cows are prettier, it’s because there’s a totally different production system based on conversion of grass to milk, a benign climate, an abundance of water supply.

“By that, you find in New Zealand you can graze your cows all year round, which results in much lower costs per litre of milk produced than in the UK.”

However, despite his fears for the dairy industry in the UK, Mr Schon said there was no better time to be investing in agriculture.

If he was given £100,000 to invest, he would “definitely” choose agriculture.

“When I started agriculture in the late 1970s, the world was running out of food, so I decided to go and study agriculture – and then I spent 20 odd years getting rid of surpluses,” said Mr Schon.

“I was ahead of the curve, but the curve has caught up with us and we do have a situation, a bit like the first oil shock, where people are beginning to understand that the food business is the growth industry over the next 20 years and agricultural land is a strategic resource.”