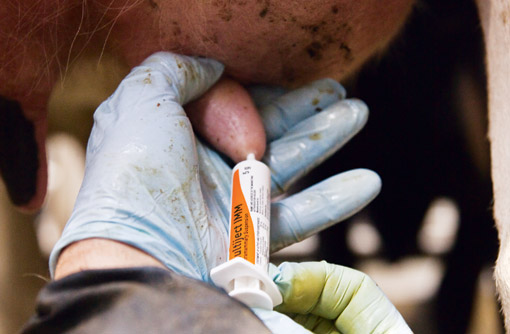 Putting down on paper a structured plan for early lactation therapy (ELT) is helping vets, producers and farm staff cut down mastitis in participating herds.

“Sixty percent of infection picked up in the first 30 days of lactation comes from the dry period. A vast proportion can be attributed to cow environment and – in particular – stems from teats not being sealed properly.”

Mr Clarke advocates identifying mastitis type present. “Not only will this indicate where the problem originated but also which tube should be used when sealing the teat,” he said.

“We need to pay more attention to sealing teats properly; there’s no need to push the tube right up inside the teat which – in my opinion – only increases risk of making a problem worse. Instead ensure the end of the nozzle just passes the 2-3mm closing of the teat end itself.”

Cow health records should show which herd members are at greatest risk; more attention should be given to this group of animals, he added.

Early lactation still accounted for 40% of mastitis. A regular milking routine including good parlour hygiene and flushing of clusters was essential. “Put fresh calved group through before the main herd members and leave the high cell count cows till last. Don’t forget, milking presents the opportunity twice daily to feel the udder for signs of mastitis.

“Make sure those staff doing the milking know the routine and stick to it including weekend relief cover. If you employ foreign labour have the mastitis control plan written down in their language. There’s no excuse for not following it in my mind.”

“My herdsman Gary Jane and his partner, Paula, have put together a good milking routine and stick to it. We foremilk all cows and have had to persist to get the relief cover to also do it. Mastitis is identified early and we achieve a cure rate of 65-70%.”

“The one area we want to improve is take-off times in the parlour to reduce teat end damage,” he added.

Read advice from the event on cull strategy here