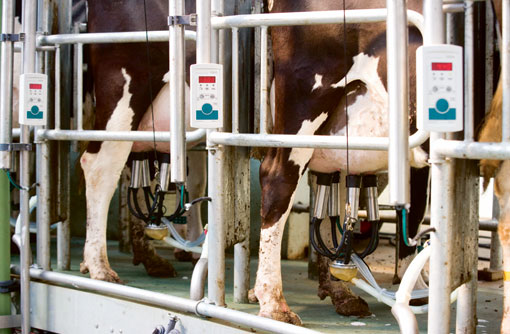 Despite overall improvements in somatic cell counts (SCC), 40% of dairy farmers are still receiving penalties due to chronic cows within the herd, according to research carried out by the University of Reading.

Analysis of more than 40m milk samples from National Milk Records, identified an encouraging proportion of animals with cell counts below 200,000/ml. However, persistent high cell count cows – chronic cows – could be preventing herds from truly getting on top of the problem.

But analysis also identified a strong link between the proportion of persistent high cell count cows and overall SCC levels, with chronic cows responsible for 57% of all high cell count samples in 2010.

The key to tackling high SCC, is looking at individual cows rather than the herd as a whole, he added.

“Farmers must work with their vets and have a series of protocols in place. They should individually test chronic cow with the California Mastitis Test, and if the animal is not healing herself, they might have to move onto antibiotics.”

“I appreciate that it is a battle for producers and vets, but if they know which cows are doing the damage they can target problem cows at the earliest opportunity to bring cell counts under control.”

Vet Peter Edmondson, Shepton Veterinary Group, has achieved an average cell count of 188,000/ml with his dairy clients, by working to tackle the source of the problem, rather than solely treating the symptoms.

He said farmers need to “bite the bullet” and create a long-term solution to the problem, by identifying the source of the problem.

He added: “Every high cell count is just a symptom of something that’s happening on the farm – if you really want to get on top of cell counts you need to know what bugs are responsible for the problem and take basic management measures to protect the low cell count animals.”

Andrew Bradley, Quality Milk Management Services, mirrored this advice and said too many farmers focus their mastitis control on treating chronic cows rather than getting to the source of the problem.

“Unless you address the underlying issue, you are not going to get anywhere. This permanent desire to find the quick fix won’t work, because the quick fix doesn’t exist. Farmers need to get down to the nuts and bolts and address the problem.”

He said by tackling the source of new infections, farmers could prevent further cases of high SCC in chronic cows.

Vet Andy Biggs, the Vale Vet Group, said an increasing number of dairy farmers were failing to cull chronic cows as they felt the pressure to maintain herd numbers in light of decreasing cow numbers and tight margins.

To tackle high cell counts, farmers need to “adopt a systematic approach and get an overview of everything that’s going on”, he added.

He recommended taking the time to tailor milking routines to the physiology of the cow. “It’s not easy to do, but the quicker you can get the milk out of the cow, the better.”