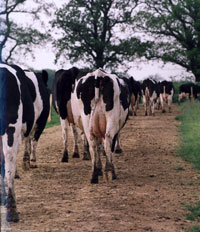 Lameness isn’t just a problem for high-yielding herds. Letting cows out to graze can soon eat up cost savings if rough tracks or poor animal handling lead to sore feet.

Grazing herds may not see the same types of lameness as high-yielding ones, but a combination of poor cow tracks and impatient herdsmen soon deliver the same results. All lame cows eat less, lose weight and take longer to get back in-calf.

Because New Zealand’s grazing herds tend to walk much longer distances to and from pasture, a big cause of lameness is excessive sole wear, which makes feet vulnerable to stone penetration, says Gloucestershire vet Roger Blowey of Wood Vet Group.

New Zealand vet Neil Chesterton has found a strong correlation between lameness in these herds, cow behaviour and how people handle cows. He visited Britain this summer to discuss lameness with Mr Blowey’s clients (see case study) and found that British farmers have the same problems with tracks and shed design. “They get the same types of lameness as I am used to, but it is further complicated by digital dermatitis on some farms,” says Mr Chesterton.

Two key factors from the talks picked out by Mr Blowey were track condition and aggressive handling when cows are taken to and from the parlour. “Camber on tracks needs to be a maximum 5% slope from the track centre to the edge. More than this and cows feel uncomfortable and start to push uphill with their outer claw which increases lameness.”

Allowing for normal behaviour, cows should move along tracks at 3km/hour. But tracks have to be wide enough: At least 5m, or 6.5m for 400 cows. Once in the collecting yard, backing gates should be used correctly, not aggressively.

Wiring them up to shock cows into moving makes them frightened and banging hocks will have a bad effect, too. They turn to face the gate and as it comes towards them, they can’t get away. This increases the number of pivot movements – and reduces milk let down. Mr Blowey also points out that cows react to side pressure. “They need plenty of space and try to escape from side forces by pushing towards the pressure, using the leg closest to the offending object. This puts extra force on the hind claw and leads to extra wear and lameness.”