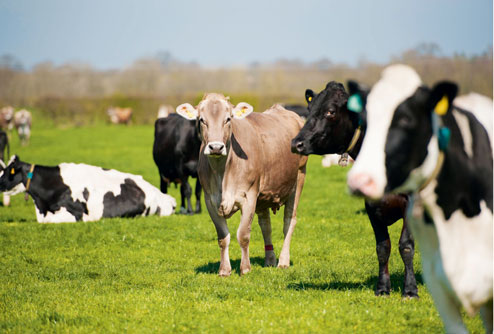 James and Kiki Willcocks had been running a Holstein herd, calving all year round, but the breed didn’t suit the extended grazing system they had adopted at Tregleath Farm, near Bodmin.

They decided to introduce Brown Swiss genetics because they wanted better functional traits without compromising yield; the Brown Swiss is second only to the Holstein when it comes to milk yield.

The breed was the logical choice for their system, says Mr Willcocks. “We didn’t want to lose yield by going to the extremes of a 5,000-litre New Zealand Friesian,” he says.

He had originally intended to keep crossing with a Brown Swiss only to achieve a purebred herd, but as the herd became purer, fertility diminished. “We began to see problems emerging.”

This system has raised fertility, introduced hybrid vigour and is achieving an average yield close to the milk output of the previous system.

“Last year was a challenging one for us as it was for nearly every dairy farmer and our yield dropped to 7,350 litres. We lost 1.2 litres a cow a day, but in a normal year our aim would be to get a yield of between 7,500 and 8,000 litres and we have been achieving this with the crossbreds,” says Mr Willcocks.

In contrast, his Holstein herd had peaked at 8,500 litres, but there were too many negatives to make the breed work for his new system. “Holsteins are a five-star cow, but they need a lot of work to get the milk from them. I wanted an animal that would give me a medium output from a medium input.”

In a good year, the crossbred herd can produce half its milk from forage. “That was another reason for moving away from a Holstein. We are getting more milk from grass and that has helped profitability,” says Mr Willcocks.

By introducing the Norwegian Red into the mix, the submission rate now averages 95%, the pregnancy rate 50% and the conception rate 52%.

Mr Willcocks believes a three-way cross outperforms a two-way cross in terms of hybrid vigour. Heterosis has been maintained at a higher level than it would had he gone back to the original breed.

The three-way cross, says Mr Willcocks, is more suited to all systems. His is not an extreme, New Zealand-style system, but cows graze when there is grass available.

In 2012, during what had been a good spring, the autumn calvers were turned out to grass on 19 February and the spring calvers grazed until 19 December. “We can work the cows hard at either end of the season,” he says. The spring calvers are housed for 120 days after calving and turned out once they are back in calf, while the autumn calvers are housed in August.

Foot and leg health have been excellent. “The Brown Swiss is renowned for having good legs and feet as well as being high-yielding. Apart from routinely trimming at drying off, when we only have to cut off any overgrowth, we rarely have to lift a cow’s foot during her lactation,” says Mr Willcocks.

The health traits of the Norwegian Red have had a positive impact on his herd. “The Scandinavians have been breeding for health traits for years so their progeny are bound to be healthier in all aspects compared with the Holstein.

“We now have fewer vet interventions, the cows are easier to keep and they last longer.”

Artificial insemination is used on the whole herd and a Hereford bull is used to sweep up any cows that are not in calf.

A reason why the Willcocks opted for Norwegian Red bulls over Swedish Reds was the stature of the animal. The Norwegian Red is smaller and, because the Willcocks had used American Brown Swiss in their original cross, the cows were large in stature. “Perhaps we went for the wrong bulls initially so we are trying to bring the size down a bit by using Norwegian Reds,” Mr Willcocks explains.

Any pure-bred Brown Swiss are retained to create a base of pedigree animals, which are entered into shows to help promote the breed.

The New Zealand Friesian bulls used in the cross-breeding programme are not at the extreme end for the breed. They are selecting animals that have 25-30% Holstein to achieve a cow capable of a good milk yield and grazing ability.

Wes Bluhm of Geno UK says crossbreeding has long been the breeding programme of choice for beef, poultry and pig producers. Three-way crossing is now becoming more commonplace among farmers who want to improve longevity and fertility, he says. But a key reason is that they are looking for cows that better suit their system.

“Many farmers are concerned about fertility. Days open and cows calving outside their calving block cost money,” says Mr Bluhm.

“Crossbreeding enables farmers to change their herds more rapidly; they can breed a more fertile animal relatively quickly and can use different breeds to target the most desirable traits for their herds. A breed such as the Norwegian Red has been bred for health and fertility for 40 years. This, in addition to the added benefit of hybrid vigour, can make significant improvements.”

Three-way crossbreeding can maximise hybrid vigour, while maintaining a simple, manageable programme. Mr Bluhm emphasises the need to select three breeds that complement each other to provide what an individual needs for the herd.

He advises making a plan of how many breeds to use, when to use them in the rotation and which animals in the herd to crossbreed.

WHAT BREED TO SELECT?

Selecting breeds that meet a farm’s needs for attaining profitability is important too. “If a farmer is ­looking for stronger cows with higher-value cull cows and bull calves, they should select dual-­purpose breeds,” Mr Bluhm recommends.

Selecting breeds with sufficient genetic potential will improve the herd.

“Bull selection is as important in crossbreeding as in pure breeding. Crossbreeding can be simple to manage as well. We recommend using different coloured ear tags to denote the various crosses and then simply breed by colour.”

Mr Willcocks’ advice to farmers thinking about crossbreeding is to give careful consideration to selecting bulls.

“I was in danger of breeding an animal that was too big,” he admits. “There are so many Brown Swiss bulls to choose from, but with the Scandinavian breeds, especially the Norwegian Red, the pools are smaller.

“The Scandinavians have been strict with culling the poorer performing bulls so there is now a good set of breeding bulls available. This means that from my point of view, I know their progeny are going to perform.”

The Willcocks have used the best available bulls with proven genetics for their system. “It is important to maintain genetic merit by researching which cow will suit an individual system,” says Mr Willcocks.

Three-way crossbreeding, he believes, has no obvious downsides. “We are in the early days of a full three-way cross as the oldest New Zealand Friesian cross is only nine to 10 months old, but so far we have only benefited from the system. As far as we can see there are no negatives.”