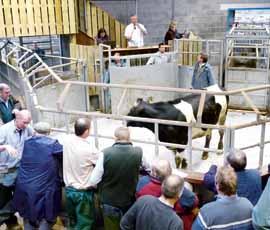 Dairy cattle trade is at a record high in many parts of the country, as auctioneers report strong farmer demand chasing fairly limited supplies of commercial stock.

First quality heifers have averaged more than £2,000 a head at a number of sales, well up on the same time last year.

Cheshire auctioneer Clive Norbury from Wright Manley said trade was at a record high, with 300 commercial animals averaging just under £1,900 a head across all types in the last sale. “That’s about £200 up on the month and £500-600 more than this time last year.

“We’ve seen good demand for all qualities, but there’s a real shortage on the market at the moment. The cull cow and calf price is also at an all-time high, which is helping keep prices firm.”

Top-quality heifers had fetched up to £2,400 at Sedgemoor auction centre in Somerset a few weeks ago, but prices were back to nearer £2,000 at the last sale, Andrew Clements said. “Trade is still very strong at the top, but second quality animals are a bit more mixed, with prices nearer £1,500.”

In Carlisle, Glyn Lucas from Harrison & Hetherington said top-quality heifers were still exceptionally strong, at an average of £2,140 at the firm’s last sale. Commercial stock had been averaging almost £2,000 for several weeks, about £150-200 up on the year, he said.

“There is a big demand for freshly calved animals, with a lot of different factors behind this. One of these is the high cull price, which means that people are more prepared to replace stock.

“Also, there’s a real shortage of breeding stock in the UK, which I think will keep driving the trade for the medium term – the next couple of years. It’s very difficult to get the numbers back up, especially when there are fewer farmers about.”

But these cattle are in the hands of fewer producers, as dairy farmer numbers in England and Wales fell again last month. February’s total stood at 10,718, 15 less than January. Some 257 producers have quit the industry over the past 12 months, with the biggest decreases in the north and north-west England.