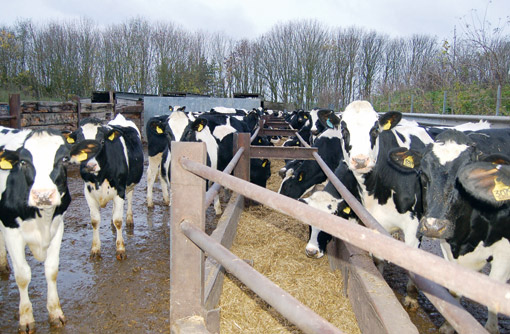 Dairy cows have been put through their paces during the past year. Dairy Update visited a farmer who was able to keep fertility on track, despite being hit by Schmallenberg and forage pressures

Good fertility is central to the entire management system at Hinton St Mary Farms, Sturminster Newton in Dorset, which is managed by Velcourt. Farm manager Mark Harvey believes proactivity and careful use of data helps him react to changes in fertility performance before they become a significant problem.

“The sooner you identify a potential problem and determine the cause, the sooner you can react and the less severe the effect will be,” he says.

The whole approach at Hinton St Mary is about consistent management of the 390-cow herd. The aim is to have 330 cows in milk every day of the year. “Fertility drives production, so we need a steady flow of freshly calved animals and my focus is to ensure 24 pregnancies are confirmed a month.”

The past 12 months have been a real challenge with a number of factors possibly contributing to a dip in fertility performance. “Our Interherd conception rate has fallen from 34% to 32% and the RMS pregnancy rate has fallen by 3% to 20%, but this is partly due to our move to three times a day milking in August, which has seen yields rise by 15% to 10,800 litres sold a cow.

“We have produced more milk, but have seen a fall in fertility. However we have been able to manage the system to limit the impact of other factors.”

In June and July last year the farm was also affected by Schmallenberg. The consequence was a decline in conception rates three months later.

“At the time pregnancy rates dipped to about 18%, but as we had identified the reason we did not have to invest time and possibly money looking for other reasons.

“Sometimes having the data just confirms the extent of a known problem rather than initiating action to sort it. Looking forward we will not be vaccinating against Schmallenberg this year, but will continue to monitor the situation.”

Variable forages have also had a big impact. Maize yields were down by about 20% a hectare and starch content was down at 26% compared with the more typical 30%. Wholecrop starch levels were even lower, down about 50% at 16% starch.

Mr Harvey regularly monitors milk protein levels as an early warning sign of diet adequacy and if needs be will then look at BHB levels in blood. “Energy levels have been a challenge and we analyse forages every month and fine tune the ratio of different forages as required. This year we had to navigate reduced quality and quantity.

“You can’t do anything about forage quality once it is made, so we tweak the diet to make the most of the forage we have. We changed the protected fat fed and also added a mycotoxin binder.

“By fine tuning the diet and monitoring performance closely we have managed to minimise the impact of poorer-quality forage on fertility and pregnancy head count. Our goal now is to make better-quality forage this year,” Mr Harvey says.

While most farmers will admit it has been a testing year, data shows there is no industry-wide trends showing a dip in fertility.

Vet John Cook for Genus ABS says this should come as no surprise.

“However, what will have affected fertility is how farmers managed the situation, particularly how cows were fed to minimise potential problems,” says Mr Cook. “Then they had to have the measures in place to allow them to monitor performance and take corrective action as required.”

Mr Cook says achieving good levels of fertility requires a huge number of factors to be taken into account (see diagram). If anything falls out of line then fertility may suffer. The extent will depend on the size of the issue and how well it is managed.

“With reproduction on a knife edge anything that makes the situation worse will have an immediate effect. Half the maintenance requirement of a cow goes on keeping the immune system ticking over and this increases significantly when cows have to fight an infection.

“Maximising energy intakes, as much by ensuring high total intakes as by supplying a nutritionally elegant, if complex diet is crucial to fertility performance.”

Mr Cook says unless fertility was being closely monitored this year’s poorer forage, and cold weather could have precipitated a fall in fertility.

“The absolute essential, especially in a year like this, is to set fertility targets and to monitor performance slavishly. This will allow you to spot problems sooner, diagnose what has gone wrong and do something about it.”

A recent analysis of performance between herds on Genus ABS’ Reproductive Management Systems (RMS) and a sample of 500 NMR herds (which represents a true cross-section of commercial dairy units) illustrates the point, says Mr Cook.

“Farmers on RMS are focused on improving reproductive performance. They adopt strict protocols, make use of specialists to detect heat and inseminate cows and use detailed information to assess performance.

“They set targets for key stages in rebreeding cows including voluntary waiting period, timing of pregnancy diagnosis and proactively managing the resubmission of non-pregnant cows. And the analysis shows that as a result they make big improvements in fertility [see table].

“The NMR herds are by no means badly managed and will be using a range of approaches to get cows back in calf such as activity monitors. But the RMS herds show better performance across all the key parameters used to assess reproductive success.

“They are serving more cows sooner, are serving a higher proportion of the cows eligible for service, they are losing less time between services and achieving a similar conception rate. The combination of better heat detection and a comparable conception rate means pregnancy rate is higher.”