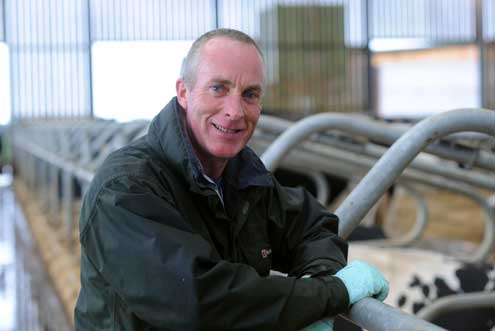 Setting a cow up to begin her lactation in optimum condition is the foundation of hassle-free milking – but it’s not always easy to get right.

Often, when producers are growing the herd, decision-making revolves around the milking cows, with transition cows coming as an afterthought. But if you get transition cow management right, the rest of the lactation is considerably easier to manage.

“We put in a 20×40 swingover parlour with a new 65x24m cubicle building, which included 115 large cubicles and two straw yards for calving,” he explains.

Although the cubicles were originally intended for the high-yielding cows, he realised they were more suitable for the transition cows, being close to the parlour and the calving yards. “We changed from all-year-round calving to spring and autumn block-calving, and increased from about 390 cows to 540. It all fitted in quite well.”


Previously, transition cows calved outdoors and were then brought into straw yards. “But it was difficult to manage – it was hard to feed the transition diet and we had lots of wastage. The cows would also nest in the same place, so we would get a build-up of mastitis.”

Now cows are grazed for the first five weeks of the dry period, before being housed on sand-bedded cubicles for the last three weeks, when they are fed a low-energy diet. “We did have some milk fever problems with the old system, so we cut out grass silage altogether,” says Mr Spiby. Now, they get 11kg of maize silage, 7kg of straw, chopped to three inches long, plus 1kg of oilseed rape, 1kg of soya, 100g of limestone flour, 150g of dry cow mineral and 60g of magnesium chloride.

“Changing the diet has pretty much eliminated milk fever, apart from in the usual suspects who get it every time,” he adds. “It’s also improved our handling of cow condition, stopping them from getting over-fat and making sure the rumen is working for the next lactation.”

Mr Spiby moves the cows on to the straw yard just before they calve, with a short walk on rubber matting to the parlour. “We have fresh water in all the yards, and clover hay on offer which gives good rumen fill.

“They stay on a straw yard until they’ve found their feet and are ready to move to the milking group – it’s all very stress-free.” As soon as the cows calve they are moved onto the milking cow diet, with added calcium to help prevent milk fever.”

Those that are susceptible to milk fever receive a 20-litre drench of warm water with electrolytes, with difficult or assisted calvers treated with antibiotics and a non- steroidal anti-inflammatory.

“Mastitis rates in the first 30 days of lactation have dropped from 10% to 4%, with milk fever rates down from 3% in 2010/11 to 1% in 2011/12. “The lower incidence of milk fever means the cows are cleansing more quickly, resulting in less metritis and displaced abomasums,” he adds.

The new facilities have made general cow management much easier, with more cows milking in less time. The elevated office above the milking parlour also has clear views over the cubicles and straw yards. “It’s so much easier to pick out cows that are about to calve, are calving or are down with milk fever,” says Mr Spiby.

An added benefit of better transition management is calf vitality and colostrum quality, he adds. “The colostrum quality is so much better – our calf losses have dropped to virtually none.”