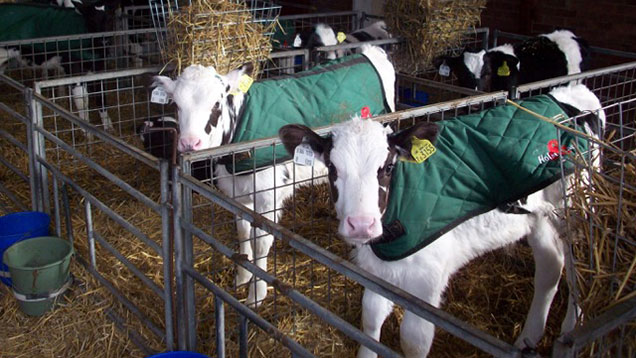 Using coats on calves born in the winter can improve growth and reduce feed costs, according to researchers at Harper Adams University.

A trial by the university and feed firm Wynnstay found that using coats on calves born between December and February added more than 5kg to calves’ overall weight gain up to 12 weeks.

As part of the study 40 two-week-old calves were split into two groups and housed in individual straw-bedded pens.

Both groups were fed a warm whey-based milk replacer twice a day and before being offered ad-lib 18% CP early weaning concentrates until weaning at 42 days. At weaning the calves were put into a group pen until 12 weeks.

One group was given coats and the other group wasn’t. Growth rates were recorded from two weeks to 12 weeks.

The study found that calves with coats recorded higher daily liveweight gains and overall gained an additional 5.3kg of weight up to week 12.

Other key findings from the trial:

See also: Read more on how to improve calf growth rates by visiting our academy

“Calves are comfortable until it gets to below 10C, at which point they get uncomfortably cold and they have to use more and more calories to keep warm,” she said.

“People tend to use coats when a calf is premature or sick, but this trial has shown that it pays to use them on all animals in the winter.

“The youngest animals in this trial were two-weeks-old, but had they been younger I think the benefits would have been even greater.”

She added: “When this trial was conducted last winter it was actually quite mild, had it been colder I think we would have seen more than 5.3kg extra liveweight gain.

“Even in a fairly mild winter, the savings made in feed costs and weight gain make investing in coats worthwhile.”

The study, supervised by Simon Marsh, principal lecturer and cattle specialist Harper Adams University, will be presented at the British Society of Animal Science conference in April 2015.