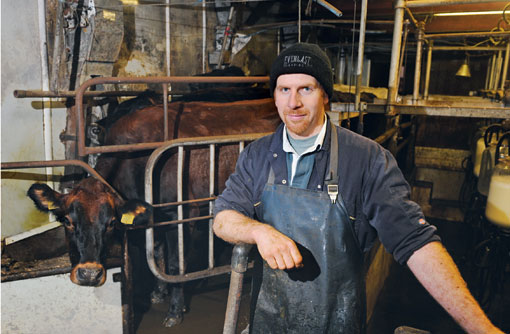 More and more dairy farmers are feeling the pressure to increase cow numbers, but bigger doesn’t necessarily mean better, as one Scottish dairy farmer has shown.

David Watson is bucking the trend by producing a steady profit from his herd of 100 cows at Midhill Farm in Biggar, Lanarkshire.

And it is his attention to detail by breeding cows to suit his system, making the most from grassland, and not trying to keep up with the Joneses that has left him with more than £50,000 a year profit.

Breeding a robust cow is a key aspect in this profitable business. Working in partnership with his father, Mr Watson milks a mixed herd of crossbred cows, including Friesian, Brown Swiss and Norwegian Red, on a primarily forage-based system. The cows yield 6,030 litres a year and achieve an average of five lactations.

“I have gone for a healthy, profitable cow that takes as little management as possible. Although we are profitable, we can’t afford a new set-up, and as time has gone on, we have been breeding cows for the system,” says Mr Watson.

“We realised there was no point in having a big cow, because we need a good-sized medium animal for our system. I have gone down this route to get a fitter, longer-lasting cow – Holsteins are a good milking machine, but we wanted a longer-lasting animal.”

He adds: “I think there’s a lot to be said about how far you can push the cows. Higher yields don’t always mean more profits. It’s almost a mindset – it’s great seeing a jar full of milk, but at the end of the day it’s your profit that keeps you in business. There’s a balance somewhere.”

Making the most from grassland and focusing on producing good-quality silage is also one of the factors driving profits at Midhill Farm.

“As much as we can, we are grass-based; it’s the cheapest feed and I think it does the cows good. We keep them out as much as we can, and when the weather is good and the ground conditions allow it, I have them out every month of the year,” explains Mr Watson. “We get 50% yield from forage – that’s the key thing for us – and the only time we made a loss was when we had bad silage in 2002; both cuts were delayed that year.”

Grass is grown for silage, with the view of getting three cuts, with a break crop of kale and forage rye in between. And concentrates, brewers’ grains and straw are bought in.

Mr Watson says: “We go for three cuts of silage these days, and we try to make as much good-quality stuff as possible because that’s the main ingredient for winter production – that’s basically six months of production based on silage.

“We try to make sure there’s no slurry put on too late and that the nitrogen is right, and then pray for sunshine. And luckily, we have not used a silage additive for 20 years.”

Another key component in making the most from grass is always keeping an eye on the new varieties on the market – something Mr Watson takes very seriously.

“Part of being profitable is getting new varieties; we are reseeding on average about every five-to-six years, and we can really see a difference in the production from young grass compared with the other grass,” he says.

Apart from making the most from the grassland, Mr Watson says a key part of the farm’s profitability is adopting a mindset in which they are not pushing for yields.

“My Dad has been down that route pushing the cows, but it wasn’t worth it. The vet bill has practically halved since then, and now the vet usually only comes out when we have a difficult calving,” he says.


Having an effective dry cow nutrition programme in place and a focus on good youngstock management are also key components to the farm’s success.

Mr Watson breeds his own replacements, and runs an Aberdeen Angus bull with the heifers, maximising on the returns from store cattle. A block calving system is in place – two-thirds of the cows calve between July and October, and one-third between January and April.

“We want the cows to reach peak production a bit quicker, so now they get a bit of barley with dry cow minerals just a few weeks before calving,” says Mr Watson.

Of his youngstock management and rearing replacement heifers, he says: “I’m aware of just how important it is to be good to them, particularly the small ones. You get the best return if you calve them in at 24 months, which is more important now we are in a batch calving system.

“We keep the bull calves for steers, and they are worth slightly more because there’s a bit of shape about them.”

When asked what advice he has for other farmers struggling to turn a profit against a backdrop of increasing costs, he says: “One of the key things is not trying to keep up with the Joneses, because a lot of people try to keep up with other people. It just doesn’t work. People don’t need to get carried away with cows giving 40 litres – it’s the bottom line that counts at the end of the day.”

He says business planning is an ongoing process, with the aim of being able to adjust it as needed due to factors such as changes in the weather or increased concentrate costs.

“You can do forecasts and predictions, but you need to be practical and realistic,” adds Mr Watson.

And does he have any plans to expand, and does he feel the pressure to get bigger?

“I think we probably need to get a bit bigger, because we are not much better off than we were when we had 60 cows. But I think 150 cows is the maximum I could have for one person,” says Mr Watson.

“The Watsons run a profitable business because they have focus. They realise they don’t need the shiniest toys or the highest yields. The business has developed with the mindset to keep control of overheads, and that remains the mindset going forward.

“Stock and grassland husbandry is key within the dairy enterprise and helps to avoid costly production. Forage quality plays a huge role in producing milk cost effectively; silage is cut for a high-quality crop and grazing is constantly monitored to ensure grass growth is maximised throughout the season.

“With a gross margin of 58% of turnover, this business is sitting in a good position to invest in its future. Over the past year [May 2010-May 2011] we have made alterations to increase the MOPF by £273/cow and I believe there is more to be had.”