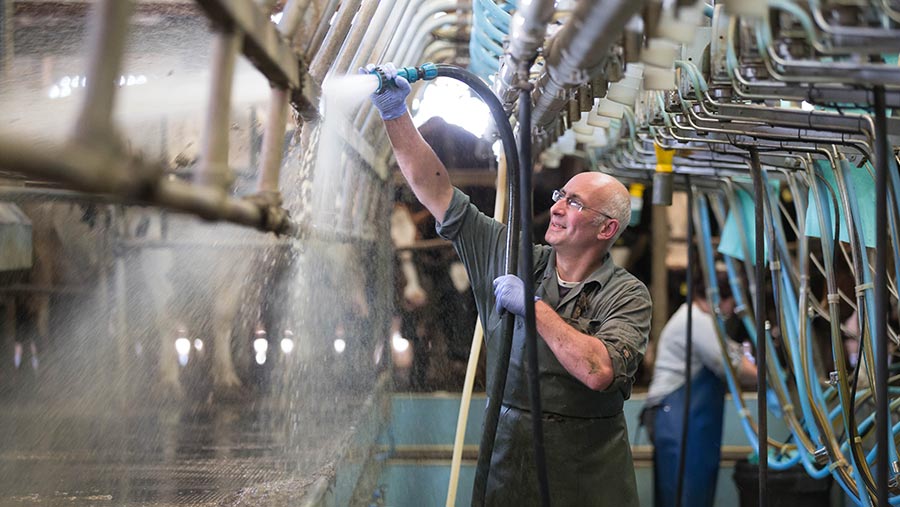 UK farms could be wasting more than £3m a year in energy losses and incorrect disinfectant doses during cleaning routines, research has shown.

The findings were drawn from an analysis of data entered by farmers into a smartphone app designed by hygiene products manufacturer Deosan.

A major part of the £3m figure was incurred in temperature losses from water heated before entering the parlour. Water heating cost the average farm £3,250 a year, the app showed.

However, inefficient release and uptake into the parlour meant 20% of the expenditure was never realised because of temperature drop.

A second key finding related to the overuse of chemical disinfectant.

On average, chemical consumption was 10% above the required levels for circulation cleaning – equal to £300 a year for each farm.

Further losses were incurred in the accelerated deterioration of equipment and milk liners, Deosan reckoned.

Speaking at the UK Dairy Day in Telford, Shropshire, on 11 September, Deosan UK sales manager David Horton said it was clear that some major improvements could be made.

“An effective wash cycle can be split into four areas which should be given equal attention to ensure hygiene investment is cost effective,” Mr Horton said.

He explained that water should leave the boiler at 77-82C to deliver a good temperature profile across the whole wash cycle. However, the research showed that on average, 18C was lost between extraction from the heater and the start of the wash.

On 33% of farms temperatures were allowed to fall below 45C.

Mr Horton advised dairy farmers to check temperatures frequently at all stages of the cycle and to carry out simple modifications to the heater outlet or parlour.

“Something as simple as lagging the pipes can make a big difference on retaining temperatures, or maybe you can reduce the complexity of the pipework,” he suggested.

The study also found that 33% of farms circulated water through the system for more than eight minutes, risking the reintroduction of contaminants and debris.

“These few minutes can be critical for an effective wash. You don’t want a carry-over of pathogens from one milking to the next as this builds a higher risk of problems,” Mr Horton warned.

The app data showed that 54% of farms introduced a chemical to the final rinse at a higher rate than required.

Deosan warned that chemical rates should be checked routinely to ensure over-dosing was avoided.