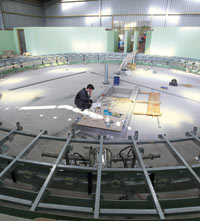 UK dairy producers continue to face a winter of milk price uncertainty with many farmers fearing a continued decline in on-farm profitability.

Various predictions estimate milk prices are set to remain at the current level, albeit with a slight increase in certain cases, but not the minimum 2-4ppl increase many producers consider is required for profitability and reinvestment.

British farmers have encountered a prolonged period of milk price volatility and restructuring has inevitably forced out so called “inefficient” producers and the inevitable further “tightening of the belt” for those that remain. Although in part, small consolation, UK prices appear to have weathered the global downturn better than other countries.

UK prices may have declined on average by 15-20%, but Ireland has seen milk prices drop in the region of one third. The Irish Creamery Milk Suppliers Association (ICMSA) recently warned as many as 3000 dairy farmers (15% of producers) may be forced out of production this year owing to the current collapse. Various reports indicate the main dairy companies are as much as 10% under quota and their position is unlikely to improve in the foreseeable future.

Australia has also encountered a backlash in response to the global situation with prices down nationally by 25-30% according to Dianna Malcolm, who farms with her husband, Dean. The couple own 100 pedigree Holstein cows averaging 10,000 litres at Bluechip Genetics, Victoria. “During 2008-2009, we were receiving an average price of AUD 40 cents a litre. This season our milk has been worth 31 cents a litre and our autumn milk is projected to be worth between 36 and 38 cents a litre,” she says.

“With break-even cost of production running at approximately 35 cents a litre the margins are tight. We are now 60% autumn calving to try and ease the irrigation, production and reproduction issues compounded by temperatures routinely passing 30C and peaking at 49C last summer.”

In New Zealand, it’s much the same story. Kiwi prices reached a peak of approximately NZ$ 7.66 a kilogram of milk solids (KgMS) in 2007-2008. By the start of 2009, milk prices had been eroded to NZ$ 4.60 a KgMS (projected price) with an opening payment of NZ$ 2.90 a KgMS with step-ups paid later in the season depending on world prices.

Milk price turmoil has embroiled the USA like never before according to Ohio-based breeders Walter and Regina Berg, Be-Ware Holsteins, Belville. “We were previously receiving $20 a cwt and this year we’re down to $10. We’re a family farm milking 100 cows and the milk price is unsustainable,” says Mr Berg.

Prices plunged even further in California with producers receiving $9 a cwt and the state’s historic lows are estimated to be $6 a cwt below the cost of production. A recent survey conducted by Pennsylvania Dairy Farmers demonstrates the level of discontent amongst 500 responders. Not surprisingly, 98% of dairy farmers confirmed they were unable to make a profit at the current milk price.

The USA national average milk price has fallen to $11.30 a cwt, down from $19.30 in July 2008, and various official costing surveys estimate farmers require a minimum of $18 a cwt in order to maintain profitability. As milk prices plummeted, farmers decided enough was enough, and have since left the industry in droves.

In mid-October, President Obama signed legislation in order to provide $350m in emergency assistance to hard-pressed USA dairy farmers. The measure provides $290m for direct support to farmers and another $60m will be used to purchase cheese and other dairy products for food banks and nutrition programmes. Critics have stated time will tell whether Obama’s measures will be enough to reverse the economic slide.

Louis Patenaude of Ferme Gillette received 75 Canadian cents a litre for milk produced in September and is currently shipping 16,000 litres a day from his 450 Holstein herd at Embrun, Ontario.

“Prices have remained stable and we’ve average about 75 cents a litre over the past year. In February, we were receiving 80 cents a litre and we were paid 70 cents throughout the summer months,” he says.