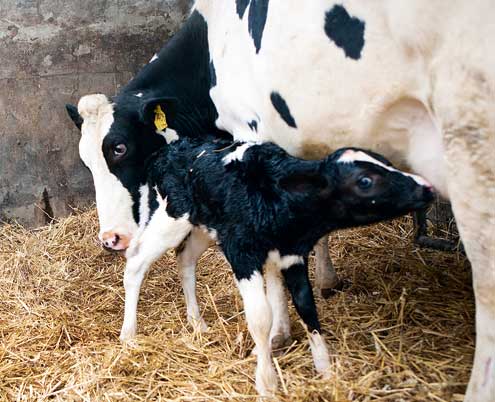 There are a host of vet analytical tools available to help prevent the development of health problems in dairy cows. Vet Owen Atkinson from Lambert Leonard and May runs through just four of them

I’ve included this test because it is so simple and readily useable that every dairy farmer ought to be aware of it. 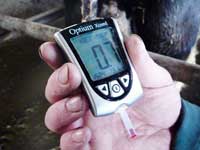 When cows are short of energy, they break down their own body tissue (lose condition). It’s a pretty common thing for high-yielding fresh-calved cows to have some sort of “energy gap” and for this to happen. However, when the body tissue breakdown is excessive, or the cow is particularly fat, she will accumulate in her blood chemicals called “ketone bodies”.

In high enough levels, the cow becomes clinically ill and the condition is called “clinical ketosis”, “acetonemia”, or “slow fever”. Her symptoms can include lethargy (hence “slow fever”), stiff muck (because her appetite is reduced), or not eating her concentrate in the parlour or out of parlour feeders. More severely affected cows can be excitable, wobbly, or continually lick metal pipework. These cows are said to have “nervous ketosis”.

Some people can smell ketosis on the breath, or even in the milk. It smells like “pear drops” or nail varnish remover (which is in fact acetone, one of the ketone bodies: you can see why the cow behaves oddly). However, this is only when the ketones are quite high, and even then some people just can’t smell it.

There is a very widely available little gadget (found in every Boots chemist), about the size of a stop-watch, which can very accurately measure ketones in a drop of blood. The gadgets are routinely used by human diabetics – mainly for blood glucose measurement, but also for ketones. A drop of blood (for example from the tail vein) is put on a test strip inserted in the machine, which gives a numerical value for the ketones in 10 seconds. Below 0.9 is considered normal; above 1.4 is usually associated with quite obvious signs of ketosis.

When the test is used:

The test can be used for routine monitoring of fresh cows to assess transition cow management. This is particularly useful when done in conjunction with testing pre-calvers for another blood metabolite, NEFA (non-esterified fatty acid), but there is no cow-side test for this. Alternatively, the test is used on suspect ketosis cows.

Each test requires a new test strip costing about £2. 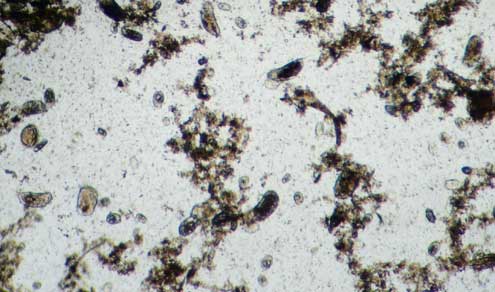 Whatever your feeding system, if you want healthy cows performing most efficiently, you need to have a healthy rumen. The rumen is at the heart of milk production, as it is this organ which allows cows to turn nutrients which other animals can’t digest into a high-value nutritious product. Many a time it is said you are not feeding the cow, but the bugs in the rumen. The cow then lives off the protein in this “microbial soup” as it passes into the rest of the digestive system, as well as the volatile fatty acids they produce, which provide the cow with most of her energy requirements.

Given the vagaries of dairy cow nutrition, acidosis is always a risk for the rumen, and feed efficiency then plummets, followed by cow health.

There is currently no better way of testing for acidosis than to take a sample of rumen fluid, and there is no better way of seeing just how the bugs are doing than looking at this sample down the microscope.

The procedure of collecting the rumen fluid is called “rumenocentesis” and can be carried out quickly and simply, under local anaesthetic, by a suitably experienced vet, with no ill effects on the cow.

When the test is used

Rumen fluid analysis is typically done as part of a wider rumen health assessment, which might include sieving of faeces, scoring for rumen fill and condition scoring the cow.

Depending on the herd size, about 12 cows are sampled to give a representative picture, usually a mixture of fresh calvers and cows at peak yield. This might be in response to a suspected diet problem, such as acidosis, or as routine monitoring in some higher-yielding herds.

The tests involved are not inherently expensive, but do require a vet with experience in the procedure, and will take a little time to perform correctly. A rumen health analysis of a dozen cows will cost in the region of £250. 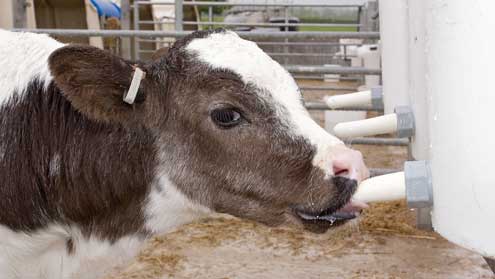 Unlike other animals, such as humans for example, calves are born with no antibodies and so are totally susceptible to infections and diseases until they have absorbed sufficient antibodies from good-quality colostrum.

Colostrum quality can (and should) be simply assessed on farm using a colostrometer. This device is a weighted glass float which is placed in the colostrum, and will float or sink to a degree depending on the density of the colostrum.

Where the colostrum has more antibodies it is more dense and the colostrometer floats higher.

However, even with good colostrum, calves need to receive enough of it, soon enough and in a stress-free manner so they can absorb enough antibodies to give them protection for those vital first few months after which they produce their own.

There are several ways to measure how well this is happening, all of which involve taking a blood sample from the calf. The Zinc Sulphate Turbidity (ZST) test can be done using serum (blood without the blood cells), or a more accurate test which gives a numerical value for a certain type of antibody, called immunoglobulin G (IgG).

More recently, in our practice, we have been using a simple calf-side test to measure the specific gravity of the serum, once the blood has either been spun down in a centrifuge, or left to settle in the test tube. The specific gravity of the blood is dependent on the protein content, and in calves this is essentially the immunoglobulin plus albumin. As albumin is pretty constant in new-born calves, it’s the immunoglobulin (antibody) levels which will result in either a high or low specific gravity, which is measured by an instrument called a “refractometer”.

When the test is used:

Testing is best done routinely for monitoring purposes, for example, six calves of two to three days old every month. A trained herdsperson can collect the blood samples. Measuring calf IgG levels should always form part of the investigation of calf health problems, such as scour or pneumonia. Low antibody levels should trigger a full review of fresh cow and colostrum management protocols.

A few consumables and a short amount of time should mean this test can be done for about £2 a sample.

High cell counts can cause loss in revenue if maximum milk price is not attained, and also in yield reduction. However, cell counts are not just a concern for those farms with bulk milk cells near or above 200,000 cells per ml. Even in farms where cells are well controlled, a robust system of individual cow cell count data analysis forms an essential plank of udder health management.

The challenge is having the means, time and aptitude to handle the data, which in larger herds is quite considerable. Computers can have their frustrations, but one thing they are good at is dealing with data.

There are a number of different programs which record and sort cell count data in various ways. The simplest would be the online services offered by the milk recording companies. There is also a bespoke programme called Cell Check which uses any milk recording data to sift cows into groups for monitoring or action.

Assessing cell count data regularly puts vets in a great position for reacting early to alterations to the farm’s norm: for example, the proportion of cows above 200,000 often rises before the farmer has detected any significant alterations in his weekly bulk milk tests, and steps can be taken early on to put things back on track again.

Testing may be charged for in different ways (eg included in the cost of recording). Some vet practices may download reports from milk recording websites, and charge on a report basis or time with farmer to go through them. Costs may range between £0 and £50 for every recording.