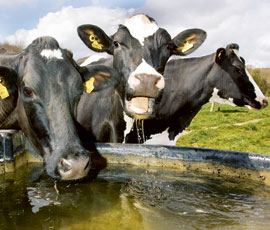 Cows have a large daily consumption of water, with an individual animal capable of drinking up to 20 litres in just one minute spent at the trough. High yielders giving 50 litres of milk could drink up to 150 litres of water a day in hot weather.

Such statistics may not be at the forefront of every farmer’s mind, but at a time when the dietary needs of the modern dairy cow are meticulously monitored, it seems their water requirements – in terms of cleanliness and accessibility – are being overlooked.

“Big herds have big troughs with the intention of providing plenty of water. But unless the trough is being cleaned out at least every few days, there will be a build-up of bacteria that thrives on the feed and silage left when a cow drinks,” he says.

Research has shown cows are sensitive to poor-quality water. When their water supply isn’t fresh or carries a poor flavour or smell, intakes will be reduced. A recent Swedish trial showed a 40% reduction in water intake could cause a 25% decrease in milk production.

Vets and nutritionists warn contaminated water can cause a range of health problems, and even when cows make a voluntary reduction in the amount of water they drink there’s an immediate and adverse impact on yield.

Liz Russell, of Greenlands Nutrition, says cows shouldn’t be allowed to drink water that contains coliform bacteria at anything above the level of 10 per 100ml.

“The only way to ensure that’s not happening is to maintain a strict hygiene routine for all drinking troughs and get water analysed annually. This should test for the presence of coliforms, pH levels, nitrate and nitrites, and the total bacteria profile.”

Water containing high levels of sulphate and magnesium can cause diarrhoea and upset a cow’s absorption rate of trace elements such as selenium, vitamin E and copper. High levels of iron can also trigger an increased need for dietary copper, while acidic water – with a pH of less than 5.5 – can be linked to acidosis problems.

DeLaval’s Bob Ellis says water troughs should be scrubbed every other day – or at least once a week – with diluted chlorine solution.

“Cows drinking contaminated water – where the contamination is caused through poor hygiene – are at risk from infection from the water, but are equally likely to stop drinking altogether.” This is a situation that impacts on cow health and causes an immediate reduction in yield.

While it’s easier to notice if cows aren’t eating, it’s not quite as obvious when they aren’t drinking. Low water intakes can often be spotted by lack of urine and a much firmer dung. This may also be a symptom of dehydration from disease or fever, says Mr Ellis, who recommends when water is being drawn from a bore-hole it should be tested at least twice a year or even more frequently.

Providing clean water for cows at grass is equally important, and yet the assumption the outside environment is less likely to contaminate water than when cows are housed can lead to standards being relaxed.

“It’s important to be vigilant about the cleanliness of outside troughs. As herd numbers increase it’s essential adequate drinking trough space is available. Trough space that allows 10-15% of the herd to drink at the same time should be provided. Any jostling or competition at the trough can lead to water becoming more easily contaminated.

“Troughs for cows at grass should be totally emptied, scrubbed and refilled with fresh water regularly. Ideally, the area around the trough should be concreted to make cleaning easier and reduce the risk of a build up of bacterial growth close to the water supply,” says Mr Ellis.

Vet Jonathan Statham, of Bishopton Veterinary Group, says it’s important to monitor water quality and access very closely. “There are specific pathogens in unclean water that can be harmful to cows and also some that can be passed to humans. Johne’s disease can also be spread through water.

“Where farms are using bore-hole water there can be issues with palatability, so it must be carefully monitored. There can also be high iron or sulphur present, which can act as binders for other trace elements.”