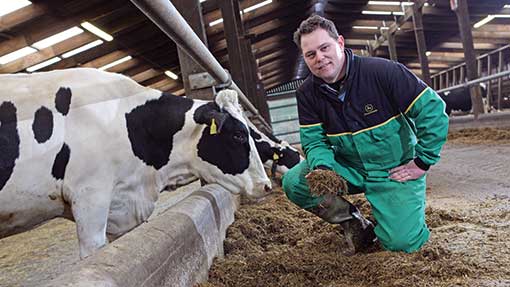 Welsh dairy farmer Rhys Lougher has increased milk yields by almost 3,000 litres in the past four years by improving housing, nutrition and switching to three-times-a-day milking at Ty Tanglwyst Farm.

It is a focus on all aspects of cow management that has seen his herd of 100 pedigree Holsteins enter this year’s top 20 NMR annual production report ranking for the first time, coming in at number 17.

Increasing milk yields a cow has been a necessity for the 61ha farm, which has been unable to expand cow numbers. The M4 slices through the heart of Mr Lougher’s land and is bordered by residential housing in the north, and south-facing limestone quarries.

Rewind eight years to 2006 when the milk price fell to 17p/litre. Then he conceded they either had to get out of milk production or change the way their business operated.

“We are land-locked and there is no low-value available land, but we didn’t want to get out of cows. It was a well-established pedigree herd, so we looked at adding value.

“We wanted to create a sustainable milk price that would help us maintain a high-input, high-output system, because we run a small number of acres,” says Mr Lougher, who farms in partnership with his parents John and Liz, grandparents Richard and Mary, and wife Emma.

They are now running a thriving on-farm processing and bottling plant, producing 1m litres of milk a year, and sell home-made cream, milk and butter to the local community.

Raw milk is sold to the bottling business for 2p/litre above the average UK farmgate milk price. Surplus milk is sold to First Milk and during periods of high demand the co-op allows them to buy milk back.

Increasing production of the herd has been an integral part of their business strategy. “We are conscious we are on a small area of land and we want to make sure we running at optimum capacity,” says Mr Lougher.

Adding value to their milk has enabled them to invest heavily in the dairy to help improve efficiencies, not least by increasing yields.

They have replaced a 25-year-old six-unit tandem parlour with a 20:20 herringbone parlour, which has reduced milking time from three-and-a-half hours to two hours.

“There’s a quicker throughput time, which has increased lying-down time and reduced standing times.” He believes it has also improved blood flow to udders and helps rumination.

In 2011 they switched to three-times-a-day milking, which has really helped to push up milk yields.

“Increasing milk yields was not our main reason to move to three-times-a-day milking. We wanted to reduce pressure on udders and we are convinced it will improve longevity.”

The first milking starts at 8am, followed by a second at 4pm and a final one at midnight.

In 2010 they also built a new, wooden cubicle shed to accommodate 108 cows.

“Because of the bottling business we have a lot of visitors so cow housing is an important aspect for our image,” explains Mr Lougher.

“Our marketing is highly focused on the traditional family farm image and we felt a framed barn ticked that box for us, because it looks traditional.

“We have improved the environment for the cows massively. Cows now have a lot more space.

“You get quite a variation in the size of the herd, so you have to cater for the biggest mature Holstein,” he adds.

“We have designed the shed very much with in-calf heifers in mind to create the optimum environment for transition cow management,” he adds.

This is key, as selling elite pedigree stock is a fundamental part of the business.

The closed herd of all-year-round calving cows is served with sexed semen only to maximise the number of heifers born.

“This means we have surplus females for sale. The cows have five goes of AI and youngstock just three.”

If they have failed to conceive after this a homebred pedigree stock bull is used to sweep up. Currently, services to conception average 3.6.

Cubicles are 4ft wide and feature mattresses for improved comfort. Cows also get 4ft of feed space, which Rhys says has helped to eliminate bullying and improve intakes.

“We opted for the widest passage way possible so there’s no chance for confrontation and competition for feed has been removed,” he adds.

“The cows eat their feed off a stainless steel surface which encourages high intakes.

“It is a smooth surface so cows can eat very aggressively and lick up small particles.”

He had also adopted a US-approach to nutirtion.

Previously cows were being fed grass-maize silage, which was mixed up using a bucket, before being dispensed into ring feeders.

But he has since invested in a mixer wagon and is feeding a TMR maintenance ration alongside 1.5kg of cake a day in the parlour to produce 35 litres of milk. High yielders are then topped up in the parlour further.

“More than 35 litres they get an extra kilo of cake for every 2kg increase [in milk] up to a maximum of 9kg/day,” says Mr Lougher.

“Moving to three-times-a-day milking has allowed us to feed concentrates in smaller amounts, which has reduced stress on the rumen.”

Improvements in the ration means that total crude protein in the diet has been reduced from 24% to 16.3%.

The farm’s nutritionist Ken March, from Countrywide, says this is because the supply of microbial protein, which derives from rumen degradable protein (RDP), is now being balanced to match the cow’s requirement of metabolisable protein.

“By not oversupplying crude protein in the diet you save energy and that energy can be channelled in milk production,” explains Mr March.

“The driver for yield is always the TMR and it is the cheapest feed on the farm. If you can replace a kilo of protein with forage it makes sense financially.”

Rumen-protected methionine was also introduced in the diet as part of a three-month trial. Methionine is the first most limiting essential amino acid.

“The response we got in terms of yield was phenomenal,” says Mr March, who explains that yield increased by five litres a cow in four weeks.

A move to a four-cut silage-making system has helped boost silage quality and has been another reason that has allowed concentrate use to be scaled back.

“We moved to four-cut about 10 years ago following a college trip to Holland. I was so impressed at their forage quality and I haven’t looked back since.”

Purchasing a forage wagon and taking control of their own entire silage making has also been a boon.

“We are able to take a longer chop which is better for the rumen so we don’t have to dilute the ration with straw.” He believes the longer fibre is more palatable and has resulted in more contented cows.

The Loughers have also expanded maize grown from 12ha to 20ha – 12ha of which is grown on contract at a neighbouring farm.

“Last year for the first time we grew 8ha at home. We’d ended up with more grass than we needed and we didn’t have enough [maize] carry over so it seemed like the ideal solution,” says Mr Lougher.

Not only has this allowed them to leave maize in the clamp for longer to improve degradability, he says it is helping to improve grassland quality.

“Having maize in the rotation makes you more rigid about reseeding when you’re using maize as a break crop.

“A lot of reseeding has been done in the past few years and we’ve starting using red clover leys on the silage ground,” he adds.

Asked what the secret to success is Mr Lougher says there is no single solution; it is about attention to detail.

“We’re not pushing cows. We are simply creating the optimum environment for cows to perform.”