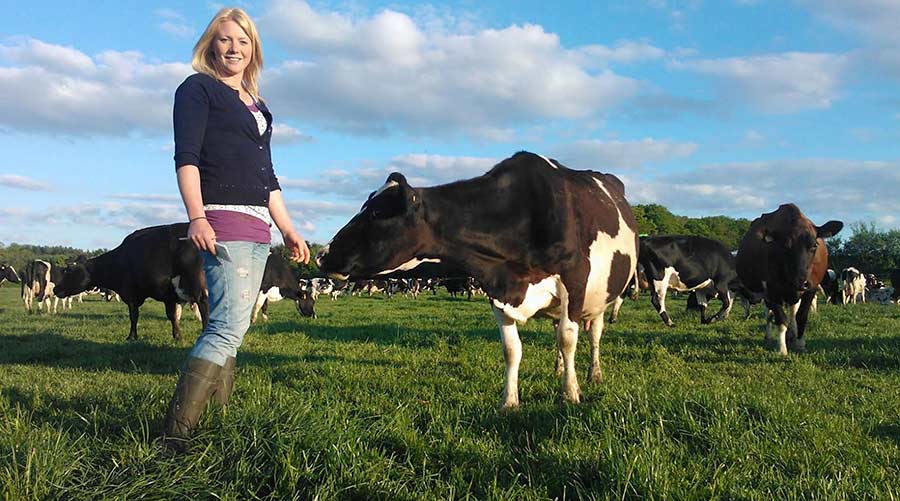 Strong leadership skills, a focus on sustainability and bold ambition were among the attributes that saw 31-year old dairy farmer Kate Lywood crowned Young Sussex Farmer of the Year at the recent Sussex Food and Drink Awards.

Sponsored by the South of England Agricultural Society in association with Farmers Weekly, the award is intended to recognise the future stars of the agricultural sector, as well as “the best of Sussex”.

See also: Search for new young farmer FW columnist – could it be you?

Ms Lywood graduated with a degree in animal science from Harper Adams University in 2011, then spent a year on a dairy farm in New Zealand, before returning home to take on the tenancy as the third generation of her family farming at Marshalls Farm at Kirdford, near Petworth.

As farm director and dairy herd manager, she has completely changed the way the farm is run, from a mixed arable/dairy unit to a simple extensive grazing system.

Increased profits have enabled her to invest in new winter housing, a parlour feeding system, a 24,000-litre milk silo and more than 40ha of grass reseeds.

She strives to achieve exceptional levels of animal welfare and all staff are treated as equals, with everyone working a five-day week.

There is already an emphasis on sustainable farming practices, although the farm will be starting a two-year conversion to fully organic status from 1 June 2019.

“Farming for me is all about making sure the animals are as happy and healthy as possible, and this award has helped show that what we’re doing is working,” said Ms Lywood..

“It really is a team effort at Marshalls Farm, with our fantastic staff, my co-director and father Roger, and my husband Jeremy all coming together to make it happen.”

Runners-up in the Young Sussex Farmer category were Rachel Knowles (27) who has developed the Silly Moo Cider brand from her family’s farm in Cowfold, and Stephen Rusling (23), arable and contracting manager at Holmsted Farm, Cuckfield.

The awards were presented at a gala dinner at the Amex football stadium, Brighton, hosted by former Olympian and farmer’s daughter Sally Gunnell.