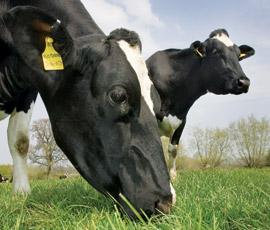 Don’t like what we’re doing? Then get involved and let us know, says DairyCo.

When you’re charged with spending nearly £7m deducted from more than 10,000 farmers’ milk cheques, you expect some flak.

Milk producers want their levy money, which funds almost all of DairyCo’s activities, to be used to provide information and resources to help support their businesses. It is the DairyCo board’s task to ensure the levy body delivers on as many fronts as it can.

Pleasing everyone is, of course, impossible. However, the background rumblings of discontent, inevitable in a system funded by so many disparate businesses, flared up dramatically this summer.

At the Livestock Event in July Farmers for Action chairman David Handley called for the resignation of chairman Tim Bennett and the board, saying DairyCo did little more than teach farmers to suck eggs. Mr Handley said FFA wanted levy money “spent on one thing – promoting our product”.

Another high-profile figure, quota broker and industry commentator Ian Potter, recently wrote that discontent among farmers over DairyCo had been brewing for months. In an Ian Potter Associates e-newsletter, he said emails from levy payers had been “flooding in” complaining about how their money was being spent, adding that all except one had called for “a change of direction and/or much more accountability”.

It is hard to know quite how many farmers share these concerns. DairyCo director Duncan Pullar maintains it is a minority, but makes it clear he wants to step up communication with these and all farmers, raising the debate to ensure DairyCo services are as relevant as they can be.

“We want to be engaged with all levy payers, and we still have work to do,” he says. “It is not a question of knowing you’re there but not being interested. We want as many farmers as possible to have their say.”

DairyCo accrues a 0.06p levy on each litre of milk sold off farm. This year, that will amount to about £6.85m to fund its core activities, including research, knowledge transfer, market development, market intelligence and environmental advice. In addition, DairyCo will also receive £400,000 of non-levy income and has budgeted for £701,000 from reserves in 2013/14, bringing total spend to £7.9m.

The key indicator of what farmers think they get for their money is DairyCo’s annual survey, which asks a random sample of more than 1,000 representative farmers to assess its products and services.

“The overall average rating of our services is 3.69 out of 5.0, reflecting a long-term positive trend,” Dr Pullar says. “As well as telling us how we are doing, the survey helps us identify farmers’ information needs and preferred channels of communication, so we can identify better ways of reaching them.”

Farmers can also air their views on DairyCo’s business plan through the annual consultation, which opens in November and which will be publicised in advance in the media and online. “This year we will be making a particular effort to obtain farmer views of the plan through their representative bodies,” Dr Pullar says. “Individual farmers can also feed back via email, phone or form.”

However, most farmer contact occurs informally, he explains. The body’s extension and communication teams spoke directly to 4,500 farming businesses last year, and to many more at conferences and shows.

He urges more farmers to use this route, either by picking up the phone, emailing comments or relaying messages via regional members to air their views. Contact details are on the website (www.dairyco.org.uk) and published in the DairyCo newsletter.

No one farmer is likely to find every DairyCo product of use, Dr Pullar stresses. “This would be like expecting every BBC licence-payer to find every programme of interest and value, which clearly they don’t.”

Nevertheless, some topics draw more criticism than others. Milkbench has been described as unrepresentative and expensive, costing £550,000 to benchmark just 1,000 farming businesses.

Data was collected from farmers who requested the service, Dr Pullar explains. “However, it is still the largest dataset of its kind and has proven exceptionally useful, raising awareness and uptake of benchmarking, steering DairyCo strategy and supporting the concepts behind the newly launched NFU strategy for the dairy industry.”

Working on key welfare challenges such as lameness and mastitis could be seen as basic to some, he agrees. “With lameness incidence at 27% to 40% and mastitis at 40-65 clinical cases in 100 cows a year, we consider these issues very much live.” Like other key programmes, the Healthy Feet and Mastitis Control Programmes returned a good return on investment last year, he adds (see panel).

Many farmers, such as Mr Handley, want to see more spending on generic promotion. Dr Pullar maintains that activity needed huge investment to succeed and the industry already carried out £130m of branded and generic promotion annually.

“However, we see a big opportunity to promote a positive image of dairy farming. We’ve invested in our consumer-facing website (www.thisisdairyfarming.com) and now have our Discover Dairy campaign, a series of online films, promoted via social media and PR activity, headed by Adam Henson.”

Dairy exports is another area recently criticised in the press, despite DairyCo undertaking work in this area after receiving a lot of requests to do so. Research showed that BRIC countries (Brazil, Russia India and China) had potential, and DairyCo was working with others to support a trade adviser in China, says Dr Pullar.

“We often receive criticism for not carrying out an activity we are actually already engaged in. So even though we have significantly increased our communications and engagement work, we are clearly still failing to reach some levy-payers,” he admits.

“We would like to challenge levy-payers who have a strong view to phone us up, look at our website and check out our activities. Look carefully at what we do first, so you can give us feedback from an informed position.

“Only by engaging with us can our levy-payers ensure we deliver the valuable and relevant businesses and technical services that will help GB dairy farmers become more competitive.”

Andrew Mycock milks 330 Holsteins and pays about £1,500 a year into the DairyCo levy.

“I don’t begrudge paying that,” he says. “I sometimes wonder where some of it goes, but I think I get my money’s worth.”

He would welcome more on-farm events. “There’s very little in my area in the next three months. I know DairyCo staff can’t get everywhere, but getting knowledgeable speakers in front of farmers on farms is very useful. I can tell my staff to do things, but it sinks in better when someone else tells them the same things.”

He describes Milkbench as very useful. “Through this we realised our bedding costs were out of line.” But he believes some market information is not robust enough – milk price equivalents are based on too small a sample, though he understands this is to be addressed.

He backs DairyCo’s promotion of dairy farming. “Generic product promotion is expensive. My two girls are fascinated by farming films they’ve seen on YouTube -promotional videos are most likely to get people on farming’s side.”

Gavin Fowler believes DairyCo does a lot of good work but fails to get the message out to levy payers. “It’s very difficult to value their work, but my gut feeling is I probably don’t get value for money.

“Although all the info is on their website, you have to actively search for it,” says Mr Fowler, who milks 290 Scandinavian x Friesian x Montbeliarde cows. A booklet sent through the post was more likely to be read and absorbed, he believes. “If DairyCo produced something similar to Kingshay’s monthly mailings, more farmers would benefit.”

He describes market information as interesting and some as useful. He has used Milkbench in the past and has been involved with the healthy feet and the mastitis control plan, “all of which had been good”.

Mr Fowler wants more activity to promote dairy products and to counter the misconceptions around the nutritional properties of dairy products.

Examples of DairyCo programmes and value returned on annual investment (2012)

How would you spend the levy board millions?

Tell us in our levy board poll. We will publish more of your views next week.