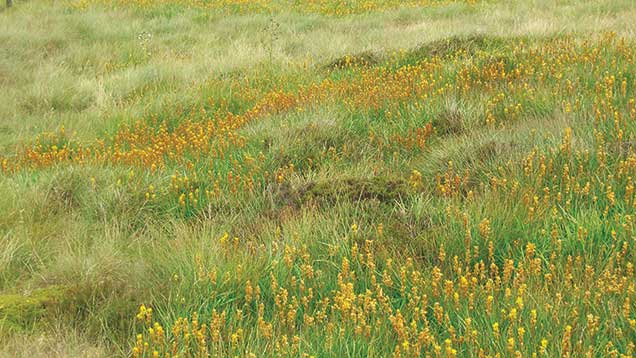 Hill farmers are being reminded to be alert to the plant bog asphodel, which grows in wetland areas and can prove deadly to lambs.

The NFU is worried the plant – which produces bright spikes of yellow flowers in summer – is becoming more prevalent in the uplands.

It claims this is partly due to the management regimes put in place for agri-environment schemes, which means the plant is not kept in check through winter grazing.

Hill farmers across northern England have been aware of the dangers of bog asphodel for many years, and remove stock from the worst-affected areas in late spring to stop stock getting access to the poisonous flowers.

However, there is a fear that instances of poisoning could increase because the plant is getting more established where land has been destocked.

Lambs who ingest the plant suffer from kidney problems and a photosensitive disorder, which gives their ears a crispy, shrivelled appearance and causes their wool to fall out.

Paul Harper, managing director of The Farmer Network based in Cumbria, says research carried out by the organisation in 2012 showed bog asphodel was a significant problem for a small number of farmers.

A guide to bog asphodel

“We’ve been told it is getting worse as stock numbers have reduced, but there is not enough information out there for those affected. Farmers have learned to manage it, but we are looking for additional funding to carry out more research.”

John Bell of Valance Lodge, Forest-in-Teesdale, says there has been an explosion of bog asphodel in recent years, with the worst-affected areas being places where winter grazing has stopped because of Higher Level Scheme (HLS) agreements.

Mr Bell says that on his own farm he still grazes 900 ewes on the fell, which helps prevent the plant from spreading. But he has seen it become widespread in other areas.

“It is definitely spreading because of HLS policies, as a lot of people are keeping sheep off the fell. So the bog asphodel is not getting grazed off at the time it needs to be grazed off.”

Mr Bell says he had four affected lambs in 2014, but he only lost one. However, he knows others can suffer much bigger losses.

“The ears start by burning off and crisping up and then it moves down the middle of the back. The wool comes out and it looks red raw, which some farmers might think looks like sheep scab.”

If the animals are not severely affected they can recover, but if their ears have shriveled up it can be impossible to tag them, he adds.

“It is important we stop bog asphodel from getting worse, and unless there are the sheep numbers to graze it down in early spring, then it will.

“When people are thinking about getting into schemes that involve taking sheep off the land in the winter months, they need to appreciate there are risks involved. I don’t think they have.”

Mr Bell says bog asphodel should be reclassified as a weed. “It is a far bigger welfare issue than ragwort ever was.”

In a statement, Natural England said bog asphodel was not a new problem and there was no specific evidence the plant has become more common or had spread into new areas of England.

“But it seems probable that it is showing an increased incidence in the vigour and amount of flowering where it is already present,” it said.

Natural England staff would always try to work with farmers to help manage the problem and avoid further losses, while also helping to meet the objectives of any stewardship agreements, it added.

The approach would differ from farm to farm but would usually involve trying to keep sheep out of high-risk areas either through shepherding or fencing.

“We can also look into making adjustments to spring grazing patterns, with appropriate observation to test the effectiveness of such an approach,” it said.