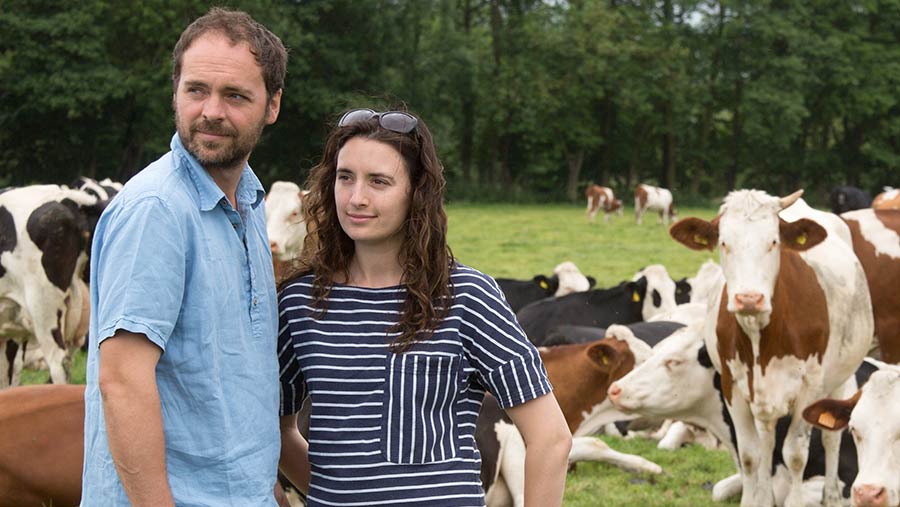 Vegans have bombarded an award-winning young dairy farmer, his wife and children with hundreds of chilling death threats.

The American activists blasted Jonny and Dulcie Crickmore with a firestorm of vicious non-stop online abuse for five days.

The mob latched on to the couple, who are in their 30s, after they posted on social media about their new triplet calves.

FW judges singled the couple out as dairy innovators who have turned their struggling dairy business after they decided to sell their milk directly to the public through vending machines.

Meanwhile, UK dairy farmers have been celebrating all that is good about their industry by posting pictures and stories about their work online under the month-long Twitter campaign #Februdairy

The Crickmores say they have been left shaken by the death threats, but the onslaught has backfired as they have been backed by almost 900 five-star reviews – and sales have soared.

Mr Crickmore said they had been flooded with “five solid days of death threats” on Facebook and Twitter. The activists even targeted their two young children

“We have had some really horrible comments,” he said. “It kicked off from a post we put on Facebook and Twitter when we had calf triplets born.

“We put a message out and some vegans found it and posted it onto these activist groups in America – and within a few hours last Thursday [25 January] it escalated.”

He added: “They sent loads of questions across to us but we didn’t reply to any of them. It just got worse and worse.”

Mr Crickmore, who’s committed to green environmentally friendly farming, said he was forced to block “hundreds of vegans” after being overwhelmed by the tidal wave of abuse.

He also reported the barrage of attacks to police and an officer went out to see them.

“I’m quite thick-skinned but my wife didn’t like it at all. We have been careful to lock all our doors, etc,” said Mr Crickmore, whose 356ha farm produces rare natural whole raw milk and cheese.

“We have never had nasty things like this said about us before. A few of our customers even got abuse back as well.

“We chose to delete the post. We wrote a new post explaining to everyone who had seen this what we do at our farm and off the back of that this post got shared over 400 times.”

He said they’d been thrilled and reassured by a massive positive online response from customers and the wider public.

“We went from 30 five-star reviews to over 850,” added Mr Crickmore. “Our sales are up and people have found us through all this nasty stuff.”

A Vegan Society spokesman said: “Veganism rejects violence and encourages compassion towards living beings and this incident is not representative of the vegan movement as a whole.

“We certainly condemn any threats of violence and encourage vegan activists to share their messages peacefully and positively.

“Vegans rely on farmers for food. We are not against them. But we do want to see an end to animal agriculture as a whole and a transition to a more sustainable, healthier and compassionate farming system.”