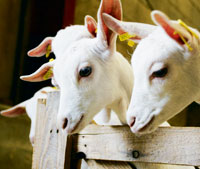 More than 20 years of consistent growth and a good relationship with landlords have seen host farmers for an RABDF commercial goat farm walk more than double herd size in the past 10 years.

Speaking at their farm at Chard, Dorset, forming part of Forde Abbey Estate, father and son team, Tim and Will Frost explained how their enterprise had undergone a vast period of change.

“In 1996 the penny finally dropped that goats could be the route to making profit and this was when we decided to set up the herd,” explained Tim Frost to more than 100 visitors.

“We did some research and started to realise there was an opportunity to go down the goat route as there was a clear market for the products.”

So drawing on their past experience in the pig and dairy industry the Frosts embarked on setting up a herd of just 300 goats and over 13 years have created one of the largest herds in the country, milking 1500 goats with plans to expand to 2000 by next year.

But, it has been the past 18 months that has seen the largest changes brought about, said Will Frost.

“About 18 months ago we entered into an agreement with the landlord, Forde Abbey Estates to contract-farm the unit. This means the estate provides the land, buildings and growing crops and we as the contractor own the goats, staff and machinery.

“This is working well and it has enabled us to expand the herd and invest in the unit,” he said. 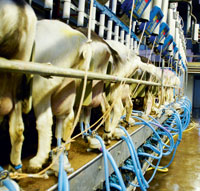 A new 80-point Fullwood rotary parlour has been installed as well as new housing for the herd. But, only when the herd reaches a target number of 2000 will the fine-tuning begin.

“Unlike other sectors where you can buy in animals, there isn’t the volume to do this. We bought 300 kids from many farms when we first set up in 1996 and this brought with it problems,” explained Tim Frost.

This means there is a lot more variation between individuals with yields a day ranging from three to six litres, said Will Frost.

“Once we have our 2000 target we will become more selective and will strive to breed from the best goats. We are only averaging 980 litres a year because we have about 650 first time kidders, but by next June we want yields up to 1100 litres a goat a year.”

Since installing the rotary parlour increasing to milking three times a day has also seen a 10% increase in milk yield. “Milking more often than not only works well with staffing, it is also better for the goats,” said Will Frost.

But good health, correct nutrition and genetic development are crucial for continued improvement of the herd, according to farm business consultant, Pete Kelly.

“The system isn’t really important, but what is important is how well you operate the system. Yield is critical in terms of profit and attention to detail is vital to getting the yield,” he said.

Feeding is particularly important when it comes to getting the yields. “It’s important goats have adequate feed and they can reach it.” 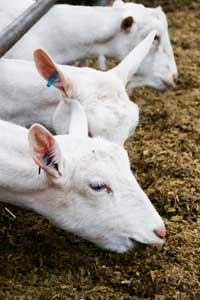 At Forde Grange goats are on a TMR of grass and maize silage. “Even when putting together a TMR it’s important not to over mix. Goats need a good chunky diet and if grass silage ends up shredded it will have lost its physical structure and won’t meet the individual’s needs. The diet needs long fibre to provide a criss-cross mat in the rumen, when goats are scouring then it’s likely the diet isn’t right,” said Mr Kelly.

Concentrates are being fed at 0.46kg/litre, but because 162ha (400 acres) are dedicated to growing forage for the all year round housed goats, there is a strive to produce more milk from forage.

However, the problem with putting together a TMR at this farm is the range in milk yields. “With milk yields ranging from 500 litres to more than 2000 litres this poses a problem where to pitch the TMR. We pitch the diet at aiming to produce 3.7 litres a goat a day, even though some are achieving 6 litres on that.”

“When the herd was established in 1996 kids were bought from various farms, which wasn’t good news on a disease front. As a result the present vaccination policy has developed.”

Goats are vaccinated for clostridial diseases, pasturella and Johnes, all of which have presented some problems in the past. But, while goats are not prone to mastitis due to the cleanliness of the udders, they have been prone to a disease called black udder, explained Ms Porter.

“Goats are prone to black udder at times of stress and treatment is quite hard. We have tried a vaccine at drying off, but we are not 100% convinced it works.”

Interestingly kids four to six weeks of age have also been susceptible to joint ill. “This is interesting because kids are housed in an old pig building so it could have come from there,” she said.

But, with a herd health plan in place, all the major diseases are under control and vaccination policies in place.

However, one area hindering development in the industry is genetics, said SAC’s Mike Coffey.

He called for those goat breeders interested in genetic improvement to form a group and to align itself with another industry body.

“There is a concerted effort in attracting goat producers to milk recording or at the very least to submit animal data to NMR for storage,” said Mr Coffey.

Supplying a diet suitable for goats with yields varying from 500 litres to 2000 litres a lactation can be tricky, with some goats producing six litres a day from a diet aimed at those producing 3.7 litres.