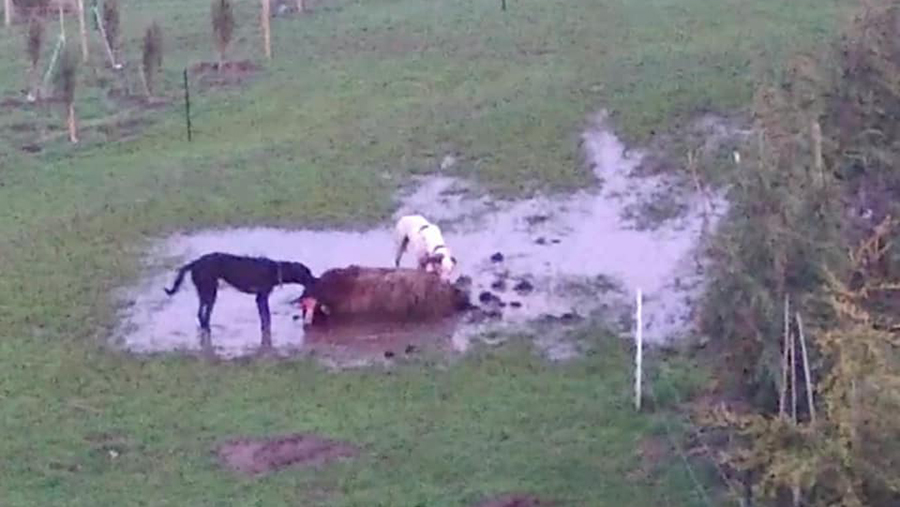 A devastated farmer has released stills of CCTV footage showing two dogs attacking and killing an in-lamb ewe and her two unborn lambs.

The attack, which happened on a North Yorkshire farm at about 8pm on Saturday, 14 April, is a stark reminder of the need for owners to keep dogs on leads around livestock at all times.

North Yorkshire Police said two lurcher dogs – one black and one white – entered a field in Catterton, near Tadcaster and attacked a group of sheep.

Heartbroken sheep farmer Cathi Copley has appealed for help on her Facebook page to trace the owners.

She said: “Three of our beautiful Zwartbles ewes were subjected to a frenzied attack by two dogs.

“One of the ewes was killed in the prolonged attack along with her two unborn lambs which were due to be born tomorrow.

“Our poor sweet ewe and her lambs did not deserve to die in this way, ripped apart and killed. These dogs have to be found – they have killed and will kill again if not stopped.”

One dog is very distinctive, white with black ears and a large black spot in the middle of its back, and looks to be greyhound/lurcher/foxhound/pointer size.

The other dog is black with a long tail and similar in size/breed. Both dogs are wearing collars.

The dogs came from the direction of Old Street Farm, Tadcaster and left heading in the same direction.

Inspector Jon Grainge, of North Yorkshire Police’s rural taskforce, warned dog owners to “keep their dogs on leads and under control when they make their way through sheep fields”.

Appealing for information, Insp Grainger said: “Livestock worrying is a criminal offence, which is estimated to cost the farming community around £1.3m per year nationally.

“Quite apart from the impact on their livelihoods, it is absolutely devastating for farmers to come across the bodies of sheep who have been attacked and then left to suffer a slow and painful death.

“Unfortunately, such attacks are a growing problem in rural communities, and North Yorkshire Police is part of a working group aiming to tackle the problem.”