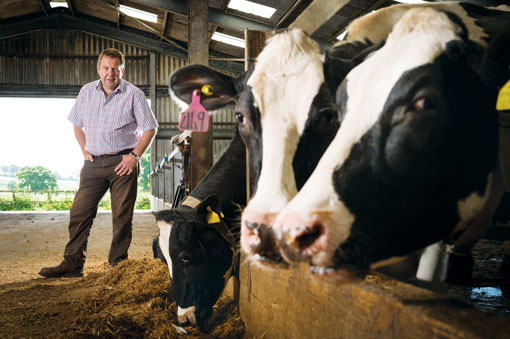 Calving down in the correct body condition – and in particular avoiding cows gaining weight during the dry period – is the number one priority in their pre-calving management, says Farmers Weekly’s Dairy Farmer of the Year Hugh McClymont of SRUC’s Crichton Royal Farm, Dumfries.

And to ensure cows are carrying the right amount of condition at calving – and are less likely to run into health problems post calving – diet is also key.

“We want cows to be in condition score 3 when they come into the dry group and to stay at that level until calving. The diet we have formulated achieves that.

“In herds where some cows may be light in condition at drying-off – say condition score 1.5 – or even at the other end of the scale at condition score 4 – there’s clearly an issue about how they’ve got to be fed during the dry period.

“But the aim for us is to dry them off at condition score 3 and let the dry cow ration tick them over at that level so there’s no change in condition before calving.

“I know some farmers put dry cows out to grass, but that would be too unpredictable in terms of what cows were actually eating. I suppose I’m a bit of a control freak because I like to know precisely what’s going into my cows.”

Mr McClymont believes the ration is a critical part of managing dry cows because of the influence it has on body condition.

“Including a high level of straw in the diet at £85-£90 a tonne is a significant cost, but if it means I can use it to get them in the right condition to calve it’s worth it. I want a calf on the ground and a cow that’s up and ready to go and with minimal risks of metabolic post calving issues,” says Mr McClymont.

Figures for calvings in one of the herds in the last six months show that out of 97 cows calved there were two cases of milk fever and 15 retained placentas – but from the 15 there were eight cows that calved twins.

“They’re getting 12kg of dry matter a head a day and that’s fed for the entire six-week dry period. As soon as cows move into the main herd after calving they are switched to the in-milk ration. There is no transition – just straight in – and they cope with the change. They’ve dropped the calf and now its time to get on with the job and within two weeks we want them settled and giving us 45-50 litres, “ says Mr McClymont.

“It hammer-mills the straw down to a size that prevents cows sorting it out from the mix,” he adds.

The dairy herd management software used at Acrehead includes a trigger for the drying-off date that flags up cows to give them a six-week dry period. “We know the calving date so it simply works back six weeks from that. It’s not based on yield. We can have cows giving 30 litres but they are dried off six weeks ahead of calving.”

There is no grouping in the milking herd – which is milked three times a day – so cows go straight from the main herd into the dry cow group – but not before they have received the full drying off procedure.

“With two people – gloved-up to administer to the cow – she is teat sprayed and wiped, and then treated with antibiotic tubes followed by application of a teat sealant. The cow’s udder is then sprayed a second time with a longer-acting disinfectant. Cows are also given a Rotavet Corona virus jab.

“We don’t do any of this during their final milking. It’s a separate procedure and there are always two staff to undertake it.”

Dry cows are moved into separate accommodation comprising of cubicles fitted with mattresses, which are scraped out once a day. Cows remain there for four to five weeks, but are carefully monitored throughout this period. For the final 10 days of the pregnancy cows are then moved to the calving group in a straw yard in readiness for calving. There is no change in the ration in the final stages of pregnancy.