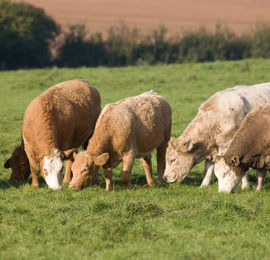 Bovine neosporosis, a parasite causing abortions in cattle is on the increase, according to sample results from Scotland.

Out of 201 samples from bovine abortions in Scotland neospora was found in 22.4% of cases, explained Frank Katzer of the Moredun Institute.

Neospora is emerging as one of the most important causes of bovine abortion worldwide with infected cattle 3-7% more likely to abort than uninfected cattle.

“Abortion storms occur after the parasite has been introduced on to the farm. But most farmers won’t know they have it on their farm,” explained Dr Katzer.

The parasite can be spread by infected dogs which act as the host. Infected dogs excrete the eggs in their faeces. Cattle then become infected if they eat or drink food or water contaminated with neospora eggs. If the animal is pregnant they can invade the placenta and then the foetus causing disease.

Dr Katzer said diagnosis of cattle abortion by neospora was difficult as live animals could not be tested. “You can only detect the parasite in tissue samples and not live animals and serology will only pick up in active growing stage, making it easy to miss carriers.”

“There is no suitable drug available for this disease so we need to make sure we adopt management strategies to prevent it being a problem,” he said.

Find out more about neospora