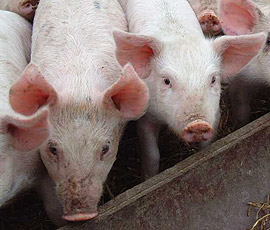 Doubts have been raised over the authenticity of undercover video footage apparently showing pigs being mistreated on two Norfolk farms.

Activists from Animal Equality claim to have filmed more than 120 hours of footage and taken 278 photographs at farms run by the East Anglian Pig Company.

The footage appears to show pigs being beaten, mishandled and inhumanely killed.

EAP is one of the country’s biggest pig producers.

Two of the company’s Norfolk farms were targeted – a weaner unit at Little Thorns, near Swaffham; and The Piggery at Didlington, near Thetford.

EAP has since suspended five employees who it said would be subjected to disciplinary action.

Supermarkets have suspended the farm as a supplier.

But there are doubts within the pig sector over the authenticity of the footage.

EAP managing director Adrian Dowling told Farmers Weekly the company was reviewing the footage, which he said was filmed in December 2011.

It had been edited to show the farm in the worst possible light, he suggested. Some of the footage might even have been filmed elsewhere, Mr Dowling added.

A statement sent by EAP to Farmers Weekly said: “We totally condemn and do not tolerate any animal mistreatment or malpractice.”

The pig industry body BPEX has also raised doubts over the footage.

Andrew Knowles, BPEX head BPEX head of communications and supply chain development, questioned how much of it was genuine.

“Recent events are the results of a determined campaign by an extremist vegan organisation with a very clear agenda: they don’t want animals to be farmed,” he said.

“We believe some of their video footage has been doctored and staged to exaggerate the situation.”

Mr Knowles told Farmers Weekly the pig industry did not see any pressure group to be the arbiter of what constitutes good or poor animal welfare.

“That is the job of an independent organisation such as the Farm Animal Welfare Council (FAWC) which fulfils that role successfully,” he said.

“All footage is genuine and hasn’t been exaggerated in any way. Animal Equality has enough evidence to prove, that what was exposed last Sunday belongs to Little Thorns, and Didlington, the piggery units, from East Anglian Pig Company,” said a spokesperson.

“Our work is serious and professional and we would never publish non-authentic footage. Andrew Knowles, has raised doubts to hide responsibilities, and it is not centring the debate on what really goes on in the industry.”

Animal Equality has agreed to provide the RSPCA with all the footage filmed on the two farms which will be reviewed before any further action is taken.

“The RSPCA is investigating and therefore we cannot comment any further at this time,” an RSPCA spokeswoman told Farmers Weekly.

An RSPCA farm welfare inspector had returned to the farms to ensure that areas of concerns were being addressed immediately.

See the previous stories on this topic