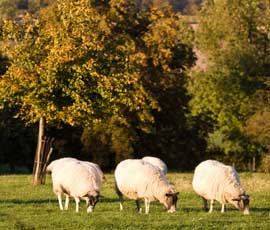 Sheep producers will now be able to tackle worms and anthelmintic resistance with “double barrels” thanks to the introduction of the first ever UK dual-action wormer.

Startect from Pfizer not only contains two active ingredients from two different wormer groups for the first time, but also includes an entirely new “purple” class of wormer.

Derquantel is from the new anthelmintic class called spiroindoles (purple class) and abamectin is a potent ML wormer (or clear wormer) which has never previously been used on UK sheep.

It is widely recognised that resistance to the three main groups of wormer – “white” (BZ), “yellow” (LV) and “clear” (ML) is growing. With this in mind, a fourth class of “orange” wormer (monepantel) was introduced two years ago – the new “purple” wormer adds another tool in the fight against worms and specifically resistance.

According to Mike Taylor, an independent veterinary consultant, multi-active wormers are the way forward in terms of resistance management.

“The two ingredients in the new dual wormer are both active against the same range of round worms, but by putting the two together, it is possible to have increased efficacy.

“Any worm that survives one wormer will be removed by the other.”

Startec will kill worms resistant to the other worm classes, and its multi-active role will also reduce resistance long-term.

However, both Prof Taylor and Pfizer vet Andrew Montgomery stressed that responsible worming by adhering to Sustainable Control of Parasites in Sheep (SCOPs) principles was crucial to the effective use of the product.

Computer modelling carried out by Prof Taylor showed by adhering to best practice SCOPs recommendations – by quarantining treating stock and not worming every animal for example – no resistance to derquentel would develop in the next 40 years when used as part of the dual treatment.

“On a non-SCOPs farm, resistance is likely to develop a lot quicker,” he said.

As part of SCOPs recommendations, maintaining a refugia in the population was fundamental to the success of any wormer strategy. Prof Taylor explained: “Most worms are in the pasture, faeces or in untreated sheep and you want to keep the level of resistance in this rufugia as low as possible.”

The level of wormer resistance in this refugia population can be managed by not treating every animal.

“By treating all stock, any worm that survives is resistant and that will increase the resistance in the refugia population. By not treating a proportion of animals, it helps keep a high frequency of non-resistant worms in the refugia.”

Mr Montgomery recommended farmers speak to their vet about selecting animals for not worming.

Establishing the resistance status of individual flocks was also crucial for responsible wormer use, he said.

“Many people will be losing a lot of money through subclinical wormer resistance and subsequent reduced growth rates without really knowing it.”

One trial demonstrated how a farm with no clinical problems was actually losing 9kg a lamb in performance because the white drench was only 40-50% effective. By using the dual action wormer – although more expensive – he would see an £8,288 return on investment through improved efficacy and growth rates.

•  The new SCOPs manual is near completion and will include best practice guidelines on using this new class of wormer. Visit the SCOPs website for further information.

•  Treatment cost is expected to be no more than 30p/head for a 25kg animal.

Benefits of a dual action wormers:

•  Enhanced efficacy against resistant worms – if one drug fails to kill all worms, the other can kill the survivors.

•  Delayed resistance development – resistance to the constituent anthelmintic classes is delayed, protecting the wormers and sustaining their effectiveness into the future.

Conditions required to maximise the benefits of a dual active wormer:

•  Actives have different modes of action and resistance.

•  Pre-existing resistance to both actives must be low.

•  Both actives have similar duration of action.

•  A proportion of the worm population remains unexposed (in refugia/in the environment) – Adhering to SCOPS principles is crucial for long term sustainable use of any wormer.