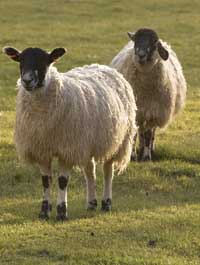 “Liver fluke is already affecting large numbers of grazing cattle and sheep across the country,” he says.

Meat Hygiene Service records show abattoirs are rejecting more than 50% of cattle livers because of fluke.

Farmers must be extremely vigilant, agrees Kate Philips, ADAS sheep consultant. “The key is to keep a close eye on body condition. Sheep infected with fluke will rapidly lose weight – failure to spot this slipping condition can result in sudden death,” she says.

“This year’s particularly high fluke risk is due to the third wet summer in a row,” says Mr Hadley.

And weather expectations suggest many parts of the country could see severe epidemics of acute clinical disease from early September, with lower risk areas seeing significant disease in early October.

“Treating sheep flocks in higher risk areas in September rather than October, could be worthwhile this year, with a second dose given about six weeks later, possibly followed by a repeat treatment in winter and spring,” he says.

“It is worth testing animals and seeking vet advice as to fluke incidence in the local area. And remember treatment may be necessary, even in flocks with no previous history of problems,” he says.

Cattle that have grazed high-risk autumn pastures should also be dosed with a flukicide effective against immature and adult fluke, 7-14 days after housing. “Out-wintered stock may also require additional treatment if wet conditions persist.

“This should include a spring treatment against adult fluke to reduce the shedding of eggs that could infect snails over the subsequent summer.”

Treating milking dairy cows for liver fluke is a more complicated matter, says vet Sotirios Karvountzis of The Shepton Vet Group. “Liver fluke products are not licensed for use in milking cows, so animals must be treated at drying off.

The sub-clinical effects of liver fluke are potentially hugely costly, stresses Mr Karvountzis. “Herds infected with fluke will typically show all the signs of sub-optimal production, including milk proteins 10% lower than expected.”

A study carried out by Shepton Vets found 80% of dairy farms involved were positive for liver fluke. “By treating these farms for fluke we saw up to a 5% increase in milk yields.”

Sub-clinical liver fluke can be easily identified using bulk milk analysis. “Bulk milk sampling should be used as a matter of course. I would suggest sampling once a year to start off with, but it is worth discussing an appropriate strategy with your vet.”

Regular monitoring is essential, agrees vet Matt Colston of Frame Swift and Partners. “Sheep infected with fluke, will have reduced feed conversion efficiency and will not grow to their full potential.

“Use information from slaughter returns to see whether fluke is a problem in lambs and finished cattle” he says.

Now is also the time to take dung samples from adult and second-grazing sheep to see whether fluke is an issue. “This should then be repeated in September/October and again in January to see whether eggs are coming through.”