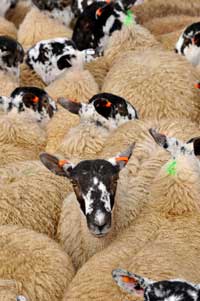 Sheep farmer’s frustration towards new EID regulation is coupled with a need to know what the new regulations mean, according to feedback from the first of a number of autumn road show meetings on EID organised by the NSA.

So far, the meetings, in conjunction with the Livestock Auctioneers Association and supported by EBLEX have been extremely well attended, says NSA chief executive, Peter Morris

The meetings involve a presentation by the NSA with a question and answer session at the end.

“The first meetings in the south east of England have shown the resentment felt by many sheep farmers towards the new identification and movement recording regulations is still present.”

However, alongside the frustration is also a strong desire to know what the changes will mean to them as individual sheep farmers and what the impact on the business will be.

“The NSA is not happy we are having to go around the country informing our members and other sheep farmers about these regulations as our opposition to them in principle is resolute.”

However, the NSA does recognise they have a responsibility to ensure those affected are fully informed.

“The early meetings in the south east have shown there is a wide range of knowledge among sheep farmers. It is also clear there is a huge amount of misinformation out there about the regulations.”

And for many farmers the changes that have been secured in recent weeks mean the negative impact is much less than they were expecting.

“Myth busting is an important part of these meetings as it is often the myths that do the most damage to confidence.”

It is important farmers understand the basic things such as the fact most of them won’t need to buy or use EID readers or have to use computers. “It has already become evident it is information like this which will make the difference and pursuade them to stay in sheep farming and not quit the industry,” he says.