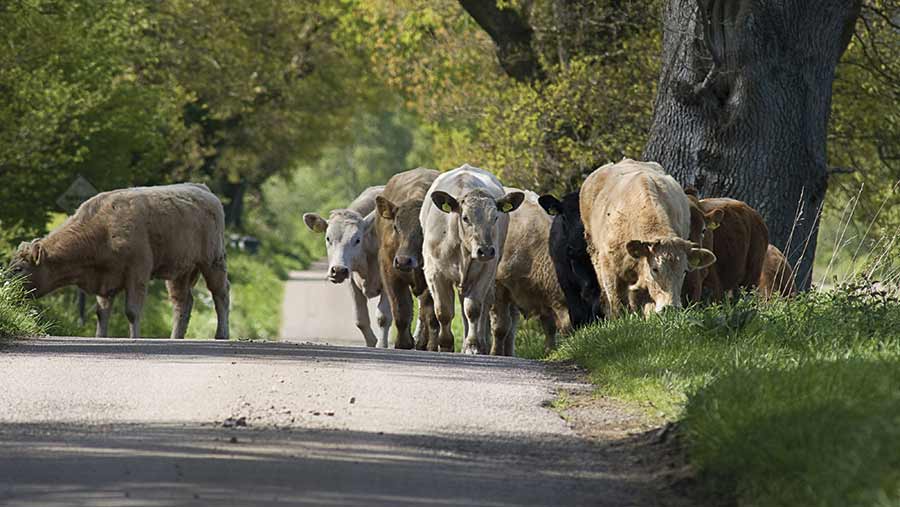 Livestock escape fields and building every day, leading, in some cases, to damage to property and people. But where do farmers stand legally?

Solictor Andrea Nicholls from Greene and Greene answers some key questions about who is responsible, according to the law, when livestock escape from fields.

She also discusses which animals are classified as “dangerous” and what farmers’ responsibilities are in terms of keeping the public safe from them.

Q. My stock have escaped and damaged my neighbour’s property. What should I do and am I liable to pay for damage?

Yes, you are accountable for damage caused to property by straying livestock. This means there is no need for the person whose property has been damaged to prove you were at fault in any way in allowing the animals to stray.

If your stock stray you are liable to pay both for the damage they cause to property and any costs which the property owner incurs in controlling or looking after the animals.

It is best to collect the animals as soon as possible and pay for the damage.

Q. Am I still liable to pay for damage caused to property if my stock escape from rented land?

Either person can be sued and any savvy property owner would probably sue both. If you are grazing someone else’s stock on your land, you must agree as part of the Grazing Licence how liability for damage for strays is going to be shared.

Q. What is the best course of action to take if my stock escape in residential areas?

It would be prudent to tell the police as they will be able to assist in warning members of the public and, for example, cordoning off roads. Then you should go and collect the stock as soon as possible.

Q. My stock escaped because a walker left a gate open. Does this make me liable and what are my legal rights?

It does not matter why or how they strayed, you are liable to pay compensation to anyone whose property they have damaged.

However, if your animal caused injury to a person, different rules apply, except in the case of dangerous animals (see answer to later). Liability is not strict.

A farmer has a duty to take reasonable precautions to guard against the negligence of people who are lawfully on his land and who may leave the gate open.

Every case is decided on its own facts, but previous cases can be a useful illustration of the type of approach a court might take to claim for injury to a person caused by stock when a gate has been left open.

The point to take away is that you have a duty to take all reasonable steps to guard against the negligent or malicious actions of walkers who might walk across your land and leave a gate open.

Q. We graze land adjacent to a railway and Network Rail have responsibility for the fencing. Are we still required to fence in our own stock, making us liable if they stray on to the line?

There is a defence available against a claim for damage to property caused by straying stock where it is not wholly the person in possession of the stock’s fault and the damage could have been prevented by fencing.

If Network Rail has a duty to fence, but fail to do so and because of their failure the stock stray, there is a defence to their claim for damage to railway property.

But in the absence of the adjoining land owner having an obligation to fence under a statute or under the terms of their property deeds, they have no general duty to fence their property to prevent your stock straying. In that case you will have no defence and so may be liable.

Q. Does this apply in the same way to motorways and airfields?

Q. Some of my stock graze in a field where a footpath runs through. Am I legally obliged to put up signs?

You are legally obliged to put up signs showing the direction of a footpath.

In relation to warning-style “Beware of the bull” notices, these might help to demonstrate you have tried to prevent or reduce the likelihood of injury to walkers on the land. A fence between the bull and the path would be preferable, however.

Q. What happens if one of my animals attacks a walker?

The case will be based on the facts and will depend on the extent of your knowledge. Guidance can be found in a case heard in Preston in 2009 where a farmer knew that a public footpath crossed one of his fields and chose to graze cattle with calves in that field.

He also knew walkers used the footpath, if the cattle attacked people on the footpath they could be seriously injured and that his cattle would act aggressively if they became stressed.

He had a duty to prevent or reduce the risk of injury to walkers under the Occupiers Liability Act 1957 and he would have discharged that duty by moving the cattle to another field or fencing off the footpath.

By failing to do either of those things he breached his statutory duty under the Act and was ordered to pay damages to a walker who was injured when she was trampled by the cattle.

Q. Which livestock may be classed as dangerous animals and how are these to be treated differently?

There are two sorts of dangerous animals:

(1) Animals that belong to an inherently dangerous species, and

The distinction between dangerous and non-dangerous animals is important because it establishes liability for the behaviour of the animal.

You would always have a duty to anyone (visitor or trespasser) on your land to take all reasonable steps to prevent them being injured by animals in your care.

But if a dangerous animal causes injury, liability for that injury is strict, in other words there is no need to prove negligence.

This article is intended to give an indication of the issues that may arise when livestock stray. It is not a substitute for professional legal advice on the issues arising in any particular case. The author accepts no responsibility for loss or consequential loss occasioned to any person acting or refraining from action as a result of this article.