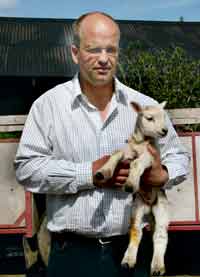 Sheep flocks may at last be paying their way, but that hasn’t stopped a north-west estate undertaking a root-and-branch review of its enterprise.

Although it’s seven years since Lowther Park Farms, Cumbria, switched to organic production, this spring’s lamb crop heralds the start of a review of the management of its 3200 ewes. The changes will, hopefully, lift lamb finishing weights by up to 3kg on each of its 5000 prime lambs. But sustaining that improvement will have wider implications for the flock’s future breeding policy.

Richard Price took over as farm manager at the 1416ha (3500-acre) Lowther Park Farms 18 months ago. When he arrived the estate was carrying about 5000 commercial ewes including a pedigree flock of Lleyns. The commercial flock was based on a mix of Lleyn x Blackface breeding which traced back to the original use of Lleyn tups on the estate’s flocks.

Last year the decision was taken to sell the 400 pedigree Lleyns and to reduce commercial ewe numbers by selective culling – mainly on age – leaving the estate with 3200 Lleyn x Blackface ewes to lamb this spring.

When the Lowther family, who own the estate, decided to switch to organic production across their entire beef, sheep and poultry enterprises, they saw the Lleyn as a breed able to produce prime lambs as well as provide a source of flock replacements. This decision was mindful of the cost and availability implications of sourcing female replacements elsewhere for such a big operation.

But versatility in any breed comes at a cost and when Richard Price reviewed the sheep flock he knew there had to be changes. “We had to increase the finished weights of our prime lambs. The Lleyn x Blackface ewes have the potential to do the job, but I knew that what I had to do to make it happen would trigger a significant change in the way that the flock has been run.

“Where that takes us in the long term has yet to be decided, but this year I wanted to make a start by increasing the value of the prime lambs by weight and conformation,” says Mr Price.

Lleyn x Blackface ewes now form the basis of Lowther Park’s sheep enterprise. Continental tups are worked across them with the aim of boosting carcass weights by 3kg a lamb

“Last year we finished most lambs off grass. The high cost of organic feed, at £360/t, meant it was costing about £18 a lamb to trough feed based on a conversion rate of 1:4.25, so that wasn’t an option we could contemplate for big numbers. In essence the whole system needs a rethink, but to initially give us a boost from prime lamb income meant we had to change to using terminal sires that could do that.”

Although conscious of the fact that moving away from the Lleyn would impact on the estate’s ewe replacement policy, Richard says it was a case of “priorities”. It led to a team of Texel, Texel x Beltex and Texel x Charollais tups being turned out with 2700 ewes last autumn. About 500 ewes were put to Lleyn rams.

“We had to get more meat, more frame and more carcass into these lambs. I’m aiming for an extra 3kg on about the 5000 lambs we’ll have to sell,” says Mr Price. Lambing was still under way in mid-April, but the flock had been scanned at 190%.

Although the sheep market remains buoyant, he is aware that making fundamental changes to the management of a big enterprise can be risky irrespective of market trends. “I’m confident about the future for sheep in the UK, but that doesn’t make it any easier to predict the market. Last year we sold draft ewes at £30 a head; who would have thought we’d have been better off running those ewes empty all winter and getting three times as much for them this spring?”

But plans are already being made for the future of the sheep enterprise at Lowther Park Farms and while Mr Price remains understandably guarded about decisions he’ll have to take in the coming months, he knows he wants to keep ewe numbers at about 3800.

“Looking at a change in ewe breed is something we are considering, but it’s early days yet. The priority is to achieve a much higher value output of prime lamb from the estate, and the management changes we’ve made will, hopefully, help us to achieve that as efficiently and consistently as we can from a sustainable system.”