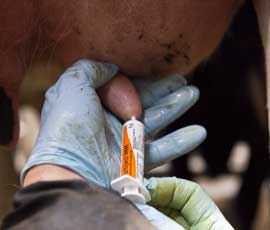 Pressure to cut antimicrobial use following a resolution by the EU Parliament last year has forced some member states to make dramatic policy changes.

Although no specific plan has been put in place to reduce antimicrobial use in the UK, it is an issue the industry must take seriously, according to NFU graduate trainee Amy Gray.

She warned farmers and vets not to underestimate the power of perception and urged the industry to make structured, informed and responsible decisions when it came to antibiotic use.

Following pre-emptive changes already made by some EU member states, the worst case scenario in the UK could mean:

• The legal reduction in amount of antibiotics used on farm

• Banning of certain classes of antibiotics

• Banning the advertising of antibiotics to farmers.

However, Ms Gray said there was little proof that reducing antibiotics would reduce resistance. “In fact, it is more likely that an enforced reduction will not work,” she said. For example, banning prophylactic use could actually lead to more animals becoming diseased and requiring prolonged treatment.

What Other EU member states are doing

The Netherlands has adopted some of the strictest policies to cut antibiotic use. The Dutch government has pledged a reduction of 50% by 2013. They also plan to name and shame farmers who exceed a specific level of antibiotic use.

Denmark has also adopted strict procedures and has separated vets form the sales of veterinary medicines. Their monitoring system scrutinises the quantities of antibiotics used on farm and a yellow card system is in place for those who exceed levels. Those exceeding levels also face more inspections. Farmers can also only keep a certain amount of antibiotics on farm for five days.

The French government has released an action plan to reduce antibiotic usage by 25% over the course of the next five years. It also contains measures to avoid the use of certain antibiotics.

Germany’s quality assurance has pledged that its members will cut antibiotic usage by 30% over five years.

The British Poultry Council has stated that their members will reduce the overall usage of antibiotics, ban cephalosporins from 1 January 2012; and ban prophylactic fluoroquinolone use in day old chicks.