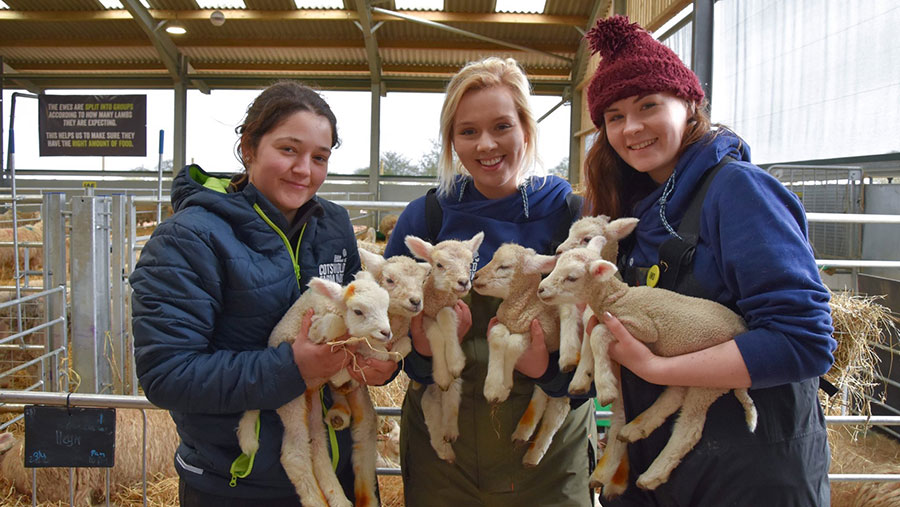 Only one lamb needed assistance, with the other five lambing naturally, Mr Henson told Farmers Weekly.

The ewe was originally expected to have five after scanning but amazed the Cotswold Farm Park team when six healthy lambs were born.

“Four is a lot, five is unusual and six is almost unheard of,” Mr Henson said.

“We are giving the ewe a lot of TLC at the moment, keeping her well fed and making sure the lambs are topped up with milk.”

See also: Q&A: How to treat and prevent coccidiosis in lambs

Visitors to Mr Henson’s Cotswold Farm Park at Kineton in Gloucestershire will be able to bottle-feed four of the lambs this spring.

The ewe was tupped by a Romney as part of the farm’s breeding programme, with ewes sold for breeding to other farms.

“We find the Romneys are popular as breeding sheep, they are good mothers, good forage converters, easy lambing and they have good fleeces too,” Mr Henson said.

The impressive six-lamb feat was achieved at the farm “many moons ago”, Mr Henson said.

“I remember six from a Finn Dorset when I must have been about five years old.”

The probability of sextuplets varies across different breeds but is very low in Lleyns, according to Jo Conington, leader of sheep and goat genetics and genomics at Scotland’s Rural College.

“Some breeds have the Booroola fertility gene which gives rise to such very large litter sizes and variable lamb birthweights. However, to my knowledge, this has never been shown to be the case for the Lleyn breed.

“Lleyns are noted for their prolificacy, mainly because for many decades, only ewes bearing twins or more could be registered with the society.”