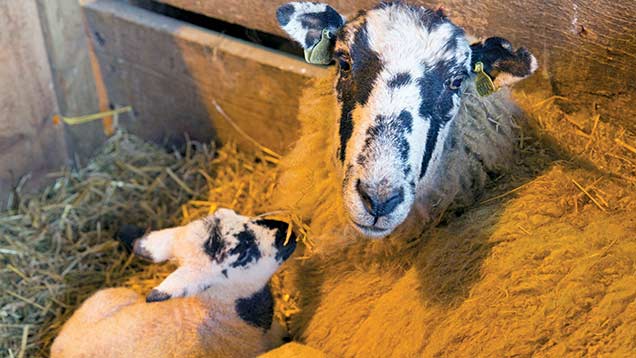 Meticulous hygiene is one of the most important measures needed at lambing to get lambs off to a good start.

An estimated 10-20% of lambs are lost between scanning and point of sale, with the majority of losses occurring during pregnancy and in the first few weeks of life.

European vet specialist Chris Lewis says scrupulous hygiene is vital during lambing, starting with the use of protective gloves when assisting ewes. “The best are the ordinary surgical type that fits closely and in no way impede the ability to sort out the problem,” he says.

“Lambing is hectic and this means sometimes there is not enough time to clean pens properly, let alone allow them to be disinfected and to dry out for a period.”
Richard Davies

Good hygiene is also important in lambing pens. Mr Lewis recommends a base of wood shavings on a limed floor because they have a degree of bactericidal activity. “Top these off with clean straw which should not be too deep to enable the lamb to move around easily.’’

If streptococcus lameness has been a problem in previous years, the straw should be dampened slightly with a garden sprayer containing 2% washing soda. “The agent causing the lameness thrives on dry straw, but is easily killed when the straw is slightly damp but not wet,” says Mr Lewis.

Most farmers cope well in the early stages of lambing but, by the middle of the season, disease can build up due to pathogens in the environment, says Pembrokeshire vet Richard Davies.

These can reach levels which overwhelm lambs. “Lambing is hectic and this means sometimes there is not enough time to clean pens properly, let alone allow them to be disinfected and to dry out for a period. Managing this before problems get too bad is the secret, even if it means finding a spare shed to use as a firebreak or even turning out if weather permits,’’ says Mr Davies.

Diseases such as navel ill, joint ill and E-coli diarrhoea can largely be avoided by preventing bacterial infection from dirty conditions.

Colostrum intake is vital to lamb health. Not only does it contain maternal antibodies to protect against disease in the first weeks of life, but it is high in energy, protein, vitamins and minerals. Ideally lambs should suck within 30-40 minutes of birth – give 200ml for large lambs and 100ml for small, the equivalent of 50ml/kg of birthweight.

“Mum’s colostrum is best, but if this is not possible the next best alternative is milk from another ewe,’’ she says. Pooled colostrum from clostridial-vaccinated cows is the third option – it must be from at least two cows to prevent anaemia in the lamb. Proprietary colostrum substitutes are a good source of energy and protein.

Ewe diet post-lambing is critical too. “If ewes are turned out to good-quality grazing then minimal amounts of supplements will be needed, perhaps to avoid grass staggers, but if the grass is less than 4cm, extra concentrates will be essential,’’ Mrs Phillips advises.

If a newborn lamb is hypothermic, attempts should be made to warm it before feeding.

This can be done by first drying with a towel then placing the lamb in a warming box with warm air fans set at 35-37C. Infrared lamps should be avoided as lambs can overheat. The lamb’s temperature should be monitored every 30 minutes and once it rises above 37C it should be removed from the warming box and fed milk through a stomach tube.

If hypothermia is severe, Mr Lewis suggests attempting resuscitation by administering 20% glucose, warmed. The results, he says, can be dramatic. “The technique is not difficult. Use a 50ml syringe and a 1in 20-gauge needle. The needle should be inserted about an inch to the left of the navel and about half an inch towards the rump. The angle of insertion should be 45% towards the rump, the lamb being held by the front legs in a vertical position.’’