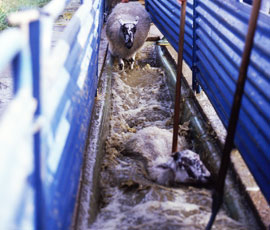 The findings, published in the journal of Critical Reviews in Toxicology, pull together evidence from 14 studies that looked at the health of 1,600 participants.

Researchers at the University College London (UCL) and Open University used statistical analysis to obtain an overview of the literature.

The results showed that low levels of exposure to OPs could affect memory and information processing to a greater degree than other cognitive functions, such as language.

In the 1980s and 1990s, farmers were regularly exposed to OPs through sheep dip products, which were used to kill or repel insects and counter sheep scab, a disease caused by parasitic mites.

Lead author, the UCL’s Sarah Mackenzie Ross, said: “This is the first time anyone has analysed the literature concerning the neurotoxicity of organophosphate pesticides, using the statistical technique of meta-analysis.

“The analysis reveals that the majority of well-designed studies undertaken over the past 20 years find a significant association between low-level exposure to organophosphates and impaired cognitive function.”

According to the World Health Organisation (WHO), organophosphate pesticides are one of the most hazardous pesticides to vertebrate animals, responsible for many cases of poisoning worldwide.

The toxic effects of high level poisoning are well established, but the possibility that long-term low-level exposure to OPs in doses below that causing acute toxicity causes ill health is controversial.

“In the UK a number of occupational groups have expressed concern that their health has been affected by exposure to organophosphates,” said Open University department of psychology senior lecturer Virginia Harrison, co-author of the study.

This includes sheep farmers, who between 1988 and 1991 were obliged to dip sheep yearly in pesticide formulations containing OPs. Since then, their use has been optional.

Between 1985 and 1998 more than 600 reports of ill-health following exposure to sheep dip were received by a government adverse reaction surveillance scheme.

Norfolk arable and beef farmer Peter Dixon used OPs during the 1980s, 1990s and 2000s before his health deteriorated five years ago.

Mr Dixon, who worked with pesticides for more than 40 years, was diagnosed with OP poisoning by a Harley Street practitioner.

After detox, which included drinking 1.5 litres of water a day, avoiding drinking alcohol and taking saunas to excrete the poison from his body, Mr Dixon has made a partial recovery.

“I have lost a lot of power in my muscles and I can’t lift heavy items. I still ache and my memory will never be the same.

Commenting on the study, Norfolk sheep farmer Jonathan Barber, vice-president of the National Sheep Association, said: “Farmers have known for years that OPs are not very good for you and they may well affect not only parts of the nervous system, but parts of the brain.

“It would be good to know whether farmers who used them suffered permanent damage, or whether they can recover over a period of time.”

The European Protection Agency banned most residential uses of organophosphates in 2001. However, they are still used in UK agriculture.

Nick Mole, policy officer, Pesticide Action Network UK, said: “OPs are still in use in the UK, albeit to a much smaller extent than they were.

“The results of this study will not be surprising to the many sheep farmers who have been affected by using OPs in the past.”

The researchers hope their findings will be of interest to government advisory committees and departments who are currently reviewing the neurotoxicity of low-level exposure to OPs.

If you are a farmer who believes you are suffering from OP poisoning, contact the Farmers Weekly newsdesk on 020 8652 4905.