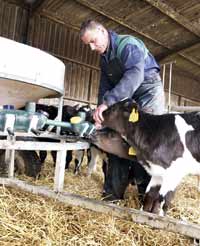 Spring milk producer Aled Jones weans at 66 days, 10 days later than his previous target, because he reckons it allows rumens to mature and be better prepared for grass intakes.

“This year I have seen calves chewing their cud at five weeks and I’ve never seen that before,” says Mr Jones, who rears up to 80 replacement heifer calves a year at Morlogws Uchaf, Newcastle Emlyn.

Calves will nibble on roughage virtually from birth and this early introduction to straw and dry calf feed has been found to negate any setbacks at weaning.

The change in thinking at Morlogws Uchaf is part of an overall shift in the rearing policy from day 14 onwards.

By feeding a concentrated milk replacer instead of milk, Mr Jones halves the liquid intake and this encourages the calves to eat more straw.

“The powder we give them is a strong concentration mixed with half the water they would otherwise be consuming in the form of cow’s milk. It means their stomachs aren’t bloated with liquid every day so they eat more roughage,” says Mr Jones, who runs a spring-calving system.

He says the costs stack up too – 66p a calf a day compared to fresh milk at 88p based on his current milk price.

Until day 14, Mr Jones maintains the same policy he observed under his previous system. Newborn calves are given two bottle feeds of warm colostrum, five litres in total. The colostrum is collected from the cows and not heifers because of its superior quality.

“When we are on the case and coping we take the calf away before it has a chance to suckle because it makes the whole process easier,” he says. “We individually feed the newborn calves colostrum to make certain they get it.”

The young calves are kept in small groups – no more than five – where they feed on cow’s milk delivered through six-teat feeders. “We do this to prevent the greedier calves from taking all the milk. It gives the smaller calves a better chance,” says Mr Jones.

When the calves are all feeding at the same rate, usually at a week old, they are moved into bigger pens in groups of 10. Anything that is struggling will stay in a smaller group.

At 14 days and in larger groups, the calves are given 2.5 litres of milk replacer mixed at 20% concentration from a 50-teat mobile milk feeder, together with concentrates and straw.

Good quality straw or hay, coupled with a reduction in liquid intakes, encourages the rumen to develop before weaning.

The calves go straight out to grass at 66 days. At weaning Mr Jones aims for target weights of 100kg for black-and-whites and 85kg for Jersey-crosses. “We used to wean at 56 days but found it was too abrupt and the calves didn’t continue to thrive when they went out to grass. We found 66 days works much better for continued growth,” he says.

The calves also receive concentrates at grass, until a time when Mr Jones is happy with their condition. This means they usually get 1kg until mid-May. He also keeps them in fields near the farmyard where he can keep a close eye on their progress.

“The difference in weight in the calves in the autumn can be as much as 50kg so they need to be watched carefully,” says Mr Jones.

Good housing is also important to the overall health of the calf, he says. His rearing pens are incorporated in an open-sided Dutch barn. After vents were incorporated in the roof, cases of scours and other illnesses have been rare. Bedding in the pens is kept clean and the calves have access to fresh water.

Mr Jones admits in the past he had not paid enough attention to the calves but he can now see the benefits of a good rearing policy. Healthy replacements are essential to maintaining a productive herd, he says. Weaning weight has been shown to have a major influence on heifer weights at mating and at first calving.

“We found calves struggled before weaning often calved down under weight. These don’t give as much milk as they should during their first lactation because they are still growing,” says Mr Jones.