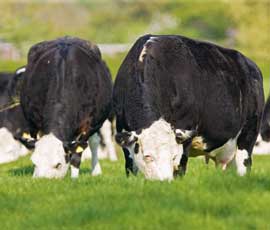 After one of the worst years for weather, supplementary feeding suckler cows at Oatridge College has more than justified itself with one of the best conception rates seen at the farm.

Although the suckler cows at Oatridge College, West Lothian, were seen to have dropped a body condition score when housed in the autumn, the biggest surprise came when the college’s Aberdeen Angus and Simmental cows were scanned – with virtually every cow in-calf. The herd usually achieves a conception rate of about 92%.

The college’s farm director Peter Scott admits he was “very surprised” by the high conception rate, but says it does open up the debate on whether spring grass alone can meet the real nutritional needs of freshly calved cows and if fertility is being compromised.

“There’s no doubt the extra feeding was necessary last year because the weather was so bad, but it looks as though it has shown us we ­probably expect too much from grass anyway and that extra feeding is needed.

“We’re all aware of the high costs of feed, but if we hadn’t supplemented last year we probably wouldn’t have had this high conception rate and wouldn’t have been expecting as many calves, so the higher costs will have been justified,” says Mr Scott.

Oatridge College runs 100 cows – 70 Aberdeen Angus and 30 Simmental – calving inside and turned out in early April. Last year, the college’s rain gauge showed 1,200ml had fallen between January and September compared to a more usual rainfall of 850-900ml.

Cows start calving mid-March and then go outside when the land will take them. Last year, cows were fed round-bale silage and about 1kg of concentrate cobs after turnout.

Mr Scott says: “We stopped feeding silage in mid-May, but the weather was so bad we started feeding it again in June.” The bulls went out on 20 June for about 10 weeks.

Mr Scott says the high conception rate took them all by surprise, especially as the cows came in thinner than normal and the average weaning weight of the calves was down by about 25kg.

He says: “The stock had struggled and yet fertility wasn’t ­compromised, presumably because of the feed that was going into them when they needed it most and they weren’t having to rely on cold, wet grass.”

Mr Scott reckons conception rates would have been down if the extra feed hadn’t been given.

And after no let-up in the weather in recent months it looks as though extra feeding will be on the cards again for this spring.

“The way our fields are looking I don’t think we can turn cows and calves out when we normally do. At the moment it looks as though we’ll get only 70% of our normal grass production this year.”

Heifers in the Oatridge herd calve at two-years old and are run separately with their calves during their first winter housing. Giving heifers preferential treatment is something SAC beef specialist Gavin Hill recommends – especially when turned out in spring with their first calves.

He advocates a buffer-feeding regime for heifers and even second calvers to reduce the risk of nutritional stress.

“Some herds are back 30% on conception rates, but we’ve now got to start reacting nutritionally to each spring and summer depending on the weather. And there needs to be a back-up policy for newly calved heifers because they have so much work to do and the weather and the grass are working against them.

Mr Hill says heifers calving in March and April and taking the bull in May and June can’t be expected to hold to service as well if they are under additional nutritional stress.

“To meet the growing needs of heifers and help them produce enough milk for their calf – and conceive into the bargain – it’s going to be necessary to offer supplementary feed to help them ovulate” he says.

The advice is not to assume that just because it’s spring or summer the suckler herd can cope with the conditions. “We have to be acutely aware of what’s happening out there and waste no time in introducing some extra feed. An energy boost is what’s needed with cobs or rolls but even just hay or silage bales will go some way towards getting some more energy into them.

“And don’t be in a rush to take the feed out as soon as the bulls come out. Feed for six weeks after the bulls have gone to help get eggs implanted and the cows settled in calf.”