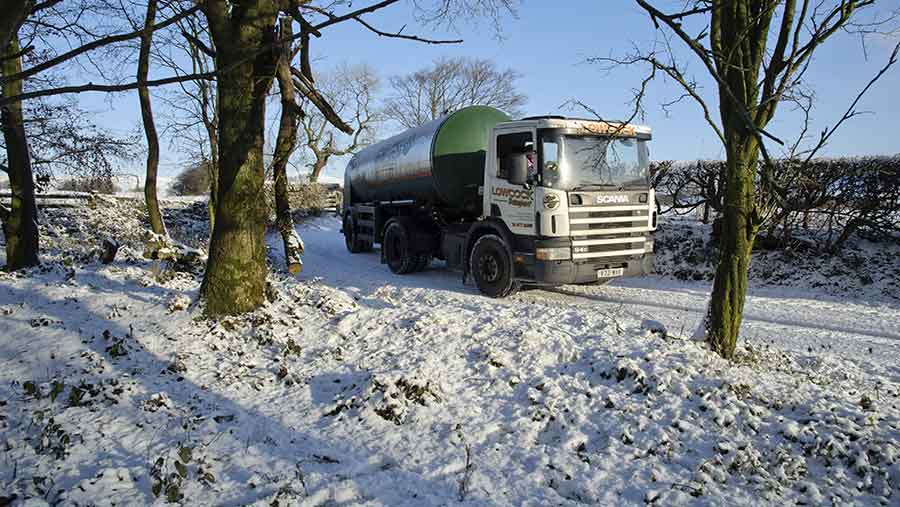 Dairy farmers across the UK have had to dump hundreds of thousands of litres of fresh milk as a result of last week’s adverse weather, which also led to widespread shortages of milk in supermarkets.

While some producers have been insulated by insurance or processor commitments to pay for uncollected milk, many farmers will have lost thousands of pounds as nationwide snowfall made roads inaccessible to collection tankers.

Last week’s extreme weather front, “the Beast from the East”, brought temperatures as low as minus 8.4C, with Kent, East Anglia, North East England and areas of Scotland the worst hit.

The UK’s largest dairy co-op, Arla, changed its policy, agreeing to pay its 2,400 UK producers for all litres of milk produced regardless of whether a tanker could reach them – as long as farm access wasn’t the reason trucks could not collect milk.

Irish dairy co-op, Glanbia, added a similar commitment to pay €0.20/litre (18p/litre) for milk that could not be collected due to the extreme weather.

AHDB Dairy said that the weather’s true effect on production would not be seen until preliminary figures emerged on Friday (9 March), but that any market changes would likely be to short-term spot milk prices and would not greatly affect UK production.

Farmers Weekly asked a number of processors how they were affected by the adverse weather and what producers are contractually entitled to if they have had to dump milk.

Despite heroic efforts by Arla famers and drivers, collections were severely affected by the road conditions with farmers in the South West, North East and Scotland experiencing the greatest impact.

To support its farmer owners, Arla changed its policy last week and confirmed it would pay any farmer who had to dispose of their milk if collections were prevented due to road conditions, excluding farm tracks and access areas.

It was the right thing to do in these extreme circumstances.

Note: payment for lost milk will not be made if farm tracks and farm access areas are the reason for collection not being made. These remain the responsibility of the farmer.

Despite a substantial number of farms being located in areas covered by red weather warnings, more than 96% of the milk that we would normally expect was picked up during the week.

That’s down to strong collaboration and communication between our business and farmers, with extraordinary levels of commitment shown to clearing farm roads and getting the job done.

Most of our farmers have insurance in place to cover for non-collections due to weather and we have long recommended that this is sensible and good business practice. Our advice to farmers who we couldn’t reach is to use this insurance cover.

The adverse weather conditions meant that we were unable to collect from a small percentage of our farmers. The vast majority of our producers are insured against such an eventuality.

Like all milk buyers, our farm collections were impacted by the adverse weather over the last few days. Our first priority is to collect milk from our members and deliver what our customers require, and in most cases this occurred.

Unfortunately, due to the severity and widespread nature of the bad weather, we were unable to make every collection from every farm when it was scheduled.

Our hauliers, colleagues and members worked tirelessly to collect as much milk as possible.

Members helped clear roads, helped transport staff to work at creameries and, in at least one case, provided overnight accommodation to a tanker driver. Our hauliers put on extra shifts to collect and deliver as much milk as possible on subsequent shifts when delays had occurred. We are very grateful for the extra effort made by all involved in difficult circumstances.

Unfortunately, some milk did have to be disposed of on farm, but it is too early to accurately tell the total volume of milk that was impacted.

With regard to payment for milk that had to be disposed of on farm, our position since 2010 has been that members are advised to take out their own insurance cover for milk not collected because of adverse weather.

Dairy Crest collects, on average, around 1.4 million litres of milk every day in Devon and Cornwall.

Although we were unable to collect some milk at the end of last week due to the adverse weather conditions, it represented a very small proportion of our normal supply.

Our first priority is always the safety of the public, our drivers and farmers.

As part of the Milk Producers Agreement we have in place with all of our supplying farmers, they are required to have adequate insurance cover in case we cannot collect their milk.

Should any of our farmers need to make a claim, we will provide them with the appropriate support.

We completed all collections on Thursday (1 March), but Friday (2 March) was extremely difficult with icy roads, abandoned cars, closed roads and treacherous conditions across our milk field (Somerset and Dorset).

We had 24/7 activity between Gregorys and Barbers to try and manage the situation as best as possible, with at least daily email updates to farmers.

It was requested in all winter contingency plans from 2016 that all farms need to have on-farm insurance as a contingency against milk losses through weather inability to collect.

The overwhelming majority have secured insurance, so, although they were disappointed at having to dispose milk, were understanding due to the difficulties that were faced.

We understand that after all the difficulties of actually producing the milk in the first place, disposal is soul destroying.

We explained to our producers the traffic implications and the dangers of taking tankers on the road after a red Met Office warning, as well as the implications should any traffic incident arise under such conditions.

What to consider when buying insurance for your milk

With many processors placing responsibility on producers to shoulder the cost of uncollected milk, Farmers and Mercantile branch manager Matt McWhirter estimates that only around 30% of producers would have insurance to cover the costs of wasted milk. He explains what to consider when looking at purchasing insurance for uncollectable milk: